Positive data of public opinion polls do not guarantee a victory at the parliamentary elections to the Party of Regions. 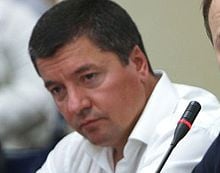 Director of Situations Modeling Agency Vitaliy Bala expressed this opinion during news conference in UNIAN.
“As of today nobody knows who and how much votes will get. And all data of public opinion polls, even from respectable institutions, do not match reality, which exists in the country”, - he said.
V. Bala explained that during publication of results of the public opinion polls the data of number of people, who refused to answer questions, should be also given for accuracy.
“In fact, there are districts, where more than 50% of people refuse to answer questions of a poll. As a rule they will not vote for power”, said the expert and added that people just do not want to show it beforehand.
The expert underlined that “sociological war” among different results of polls is rather dangerous technology.
“When they say: whatever you do the Party of Regions will get the first place, - it is a technology. There are no such real grounds in reality”, V. Bala said.
“I tell you this with responsibility, taking into consideration the southeast, where attendance is less than 50% as of today”, - he added.