Prosecutor is sure that Yulia Tymoshenko will have to face the court sooner or later. 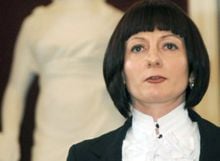 Ex Prime Minister of Ukraine Yulia Tymoshenko, which stays in “Ukrzaliznytsya” Central Hospital  in Kharkiv was absent again at the court hearing on the case concerning the UESU and tries to avoid responsibility for committed crime.

According to an UNIAN correspondent, representatives of the state prosecution Victoria Kalita expressed this opinion at press conference after the court hearing.

She noted that Yu. Tymoshenko has been undergoing medical treatment in the “Ukrzaliznytsya” Central Hospital in Kharkiv for more than half a year. According to her opinion, during this period of time “it was possible to give help and cure not only one person”.

V. Kalita underlined that Yu. Tymoshenko will have to come to court and give her explanations concerning the case sooner or later.