Lutsenko hinted that Lytvyn has no chances

Lutsenko hinted that Lytvyn has no chances yet 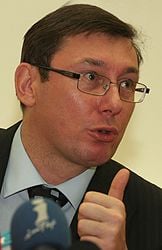 Parliament members from the Our Ukraine – People’s Self Defence have the intention to vote for the candidacy of V. Kyrylenko for the post of the head of the Verkhovna Rada of the 6th convocation unanimously.

According to an UNIAN correspondent, leaders of the OU-PSD bloc Borys Tarasyuk and Yuri Lutsenko said this at the news conference in Kyiv today.

“Our parliament members, elected by the list of the Our Ukraine – People’s Self defence Bloc, intend unanimously to support the candidacy of V. Kyrylenko”, said Y. Lutsenko.

In his turn, B. Tarasyuk also said that parliament members, elected by the list of the OU-PSD from Ukrainska Pravytsya also unanimously support the candidacy of Vyacheslav Kyrylenko for the post of speaker.

In his turn, V. Kyrylenko underlined that primarily it is planned to elect the leaders of the parliament, vote for the package of 12 drafts of laws and then put for the voting the issue on electing the Prime Minister of Ukraine.