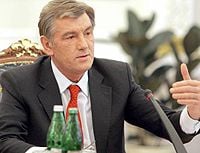 Those, who have not signed the personal agreement on the democratic coalition, have to do it as faster as possible, said President of Ukraine Victor Yushchenko at the news conference for Ukrainian journalists in Bucharest.

“I believe in democracy, there is no such problem, for which the democracy and healthy democratic forces would not be able to give answers”, said V. Yushchenko.