Lawmakers from the Batkivshchyna, UDAR and Svoboda faction have blocked the rostrum and presidium of...

Lawmakers from the Batkivshchyna, UDAR and Svoboda faction have blocked the rostrum and presidium of the Verkhovna Rada of Ukraine since the morning. 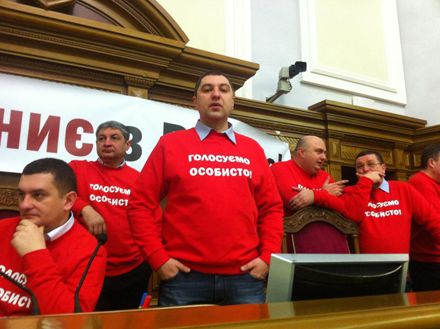 Opposition blocked the VRU/Photo of Leonid Yemets from Facebook

According to an UNIAN correspondent, as of now there are about 70-80 lawmakers near the rostrum and presidium.

UDAR lawmakers wear in red sweaters, with an inscriptions “UDAR” on one side, and “Let’s vote personally” on the other side.

At the same time the Batkivshchyna lawmakers wear ribbons in the form of the State Flag of Ukraine on their left hands.

Moreover, the Batkivshchyna representatives do not let lawmakers Oleksandr and Andriy Tabalov (who were elected to the VR from the United Opposition, but they refused to join the faction) enter the session hall.

As of now there are some lawmakers from the Party of regions and the CPU,

Militia guards stand near the building of the Verkhovna Rada of Ukraine, and a rally also is taking place: about 40 representatives of the Communist Party demand Ukraine to join the Customs Union.