There was no conflict between Tymoshenko and Shcherban – witness Taruta

There was no conflict between the “United Energy Systems of Ukraine” corporation and company of Yevgeniy Shcherban...

There was no conflict between the “United Energy Systems of Ukraine” corporation and company of Yevgeniy Shcherban “Industrial Union of Donbass”. 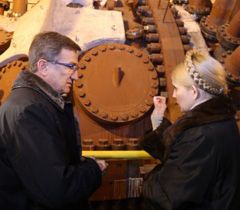 Taruta says there was no conflict between Tymoshenko and Shcherban

According to an UNIAN correspondent, witness Serhiy Taruta said this during an interrogation at court investigation on the case concerning the murder of businessman and lawmaker Y. Shcherban.

“There was a normal commercial confrontation of two sides. There was no hostile conflict; there were normal business conflicts of interests. After we had agreed, the relations were good”, - underlined the witness, answering the question of the prosecutor.

According to the words of S. Taruta, there were no tight confrontations between the corporations; and when they concluded an agreement in 1995, the relations became even friendly.

The witness also added that Y. Shcherban had never told him about the threat to his life, and he also said that he does not know about the fact that some kind of property of Y. Shcherban was passed to ownership to the UESU corporation after his murder.

At the same time S. Taruta added that Y. Shcherban was rather ambitious person, and he noted that he knew that the party of Y. Shcherban had planned to nominate Y. Shcherban as a candidate at future presidential elections.

As it was reported earlier, an interrogation of S. Taruta is being carried out on plea of the defense of Yu. Tymoshenko.