A passenger train collided with a truck at a rail-highway crossing near Giessen city (Germany) in the central part of Germany. 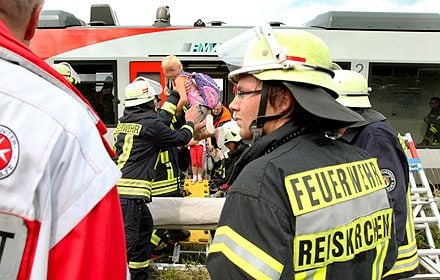 RIA “Novosti” with a reference to the web site of the local edition Giessener Anzeiger reports this.

According to the data of police, 26 people got injuries as a result of the incident, including the driver of the truck. At the moment of the accident there were 140 passengers in the train, there were children among them. According to the edition, there is no threat to lives of injured people.

A concrete reason of the incident is still unknown. According to opinion of police, the truck was on the rail-highway crossing, when roadway gates had closed, that is why he had to stop.