MP Kiselyov explained why he tore ballot of MP Teryokhin 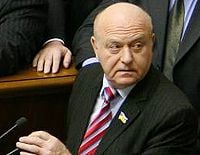 The Coalition vowed to carry out voting on the candidacy of Arseniy Yatsenyuk for the post of the VR Speaker until the representatives of the Party of Regions are tired of hampering the voting process.

Member of the OU-PSD faction Yuri Lutsenko said this in an  interview to UNIAN.

According to the words of Yu. Lutsenko, if Party of Regions representatives hamper the voting, standing near the vote boxes, he does not rule out that during the votes counting, the parliament members from the Party of Regions “will just eat them [ballots]”. “It’s ok, we will vote, until they will be full up”, said Yu. Lutsenko.

In his turn, parliament member from the faction of the Party of Regions Vassyl Kiselyov explained to journalists why he had torn the ballot of Sergiy Teryokhin, because he “impudently demonstrated the ballots before my eyes”.

At the same time, S. Teryokhin wrote an application with a request to give him a new ballot for the voting.