A Treaty on annexation of Crimea and Sevastopol to RF was signed in the Kremlin. 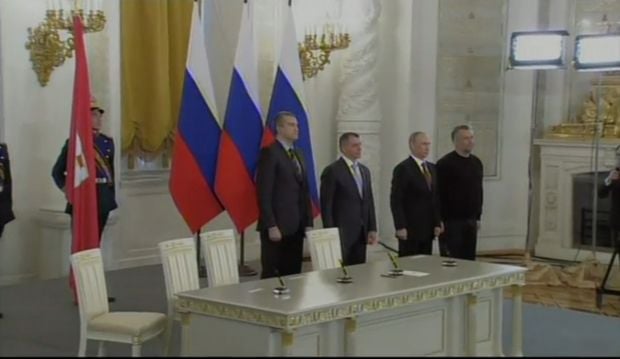 According to an own UNIAN correspondent in the RF, the corresponding document “Treaty between the RF and Republic of Crimea on annexation of Crimea to the Russian Federation and creation of new subjects in the Russian Federation” was signed by President of the RF Vladimir Putin and illegitimate Prime Minister of Crimea Sergey Aksenov, illegitimate Speaker of the Supreme Council of Crimea Vladimir Konstantinov, and  “authorized representative of Sevastopol city” Aleksey Chalyi.

Earlier Putin had agreed to annex Crimea and Sevastopol to the RF. In his decision President of the RF relies on the results of the so-called referendum and “popular will”.