How Yanukovych ran from Ukraine - investigation

Journalists managed to restore the details of the last three days of Viktor Yanukovych. 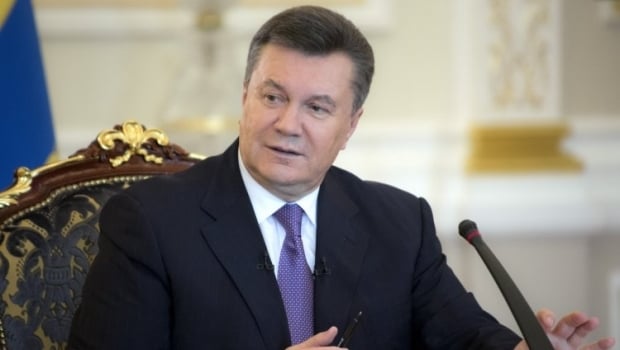 Journalists managed to find out in what ways escaped Yanukovych

Stories from eyewitnesses and his guards. The issue TSN.Tyzhden for 19 April 2014.

While in the center of Kyiv they count dozens of the activists killed by snipers the ex-President and 21 his safeguards go to Kharkiv by two helicopters “Agusta-139”. The official reason: participation in the Party of Regions congress which allegedly is going to declare an independent South-Eastern Republic. What happened to Yanukovych next? This is the first time TSN follows Yanukovych.

He is going to spend the night at this presidential residency. The secret object is situated in the Forest Park. The entrance from the route is banned by the road signs. However, TSN-Week has entered it for the first time. Now you can watch the unique shots of the so called “obcom dacha” where the first persons spend their time: Brezhniev under the Soviet times, nowadays this place hosted all the Ukrainian Presidents as well as the leaders of Poland and Russia.

At the time Yanukovych came to the place there were no people here, even no chambermaids. The safeguards of the dacha tell that they had been notified in advance two hours before the Secret Guest arrived, ordered to unlock the building and to leave it. The dacha has 1000 square meters area and consists of six bedrooms each having separate bathroom. This is billiard parlor. The table for 50 persons. Winter garden. In the hall you can see the chandelier made of cut glass and antique white concert grand.

In the afternoon Yanukovych’s motorcade consisting of five cars leaves the residency for the airport. In an hour two helicopters carrying him and his security land in Donetsk.

There was the only goal. That was to reach the Falcon jet and to run away for Moscow. The choice between own skin and the country has been made for a long time already. Not for the country’s favor. All of a sudden he experiences the first slap in the face. The take-off is banned. Frontier guards do not allow the jet traffic because there are no necessary documents. If he had been detained at the moment he would not forecast from Rostov being a marked card of the Moscow Kremlin today. Scared Yanukovych according to the eye-witnesses waited till cars came and went to hide behind Akhmetov’s walls to Donetsk Botanical garden.

There are CCTV cameras here. They undoubtedly have fixed the moment of the arrival and the next takes of him being here – may be some day we shall be able to watch the footage.

From Akhmetov’s residency Yanukovych’s motorcade started with jerk along Mariupol direction. That was the most mysterious route of his voyage because the desolated steppe became the destination. We found a witness who told that at that night he had seen how dozens of expensive cars arrived to the place. Two unidentified helicopters also arrived to the place. Allegedly Yanukovych and two his sons went some place by helicopters but in a couple of hours they returned. We still search for the owner of the helicopters and try to find out whose place did Yanukovych go for a visit. However, that was that moment the ex-President made up his mind to run away to Russia via the Crimea. Here he says goodbye to his older son. Businessman Oleksandr goes to Luhansk. Locals state that he is still in the Eastern part of the country. He has been declared wanted only a week ago. But why Oleksandr Yanukovych’s asset stolen during his father presidency has not been arrested until now?

Viktor Yanukovych the Junior who still is the people’s deputy accompanies his father to Yalta. Before the departure the main security guard of the ex-President who occupies this position beginning from 2009 and whose second name is Kobzar commands everybody to switch off the mobile telephones. Yanukovych rejects of the state security service in written form.

This renunciation of the security services has been passed to the State Security Administration only the next day. So, on the 21-st of February the state body guard still accompanies the first person to the Crimea but the route is supervised by the chief of Yanukovych’s security Kobzar personally. This is revealed for the first time in the phone conversation by the ex-chief of the State Security Administration Serhii Kulyk.

I and Kobzar serve together beginning from 2009. He is a professional of great skill, he is a real body guard. And don’t think that we ever obeyed Moscow. We always made our decisions on our own. At the moment Kobzar has been granted leave of absence.

One of the SSA officers then guarding the run-away-President is confident in his turn that Kobzar had coordinated the escape plan of Yanukovych with Russia.

In Donetsk we became illegal. We already had to hide. The process had been planned by two people – Kobzar and Alexander Yanukovych. As far as we know Kobzar adjusted the route with Moscow. In fact Moscow guided him.

This ex-officer of the SSA is abroad now, we contact him via Skype. The man asks to hide his face. He adds: Yanukovych had been granted an opportunity to leave Ukraine.

He had been let out because they did not know what to do with him. People talked about the sum of 2,5 billions of something. There was such a number, but as it seems to me the new authority having all the possibilities to detain him, did not do that. I do not know about the money, I have not seen it. There have been conversations about it and they still take place. This topic is soiled among officers.

Yanukovych’s motorcade consisting of five cars makes its way through all the posts of the road police unimpeded. It enters the Crimea easy. In Yalta they visit the Crimean Security Service of Ukraine where the state body guards write the resignation reports.

Arsen Avakov had already the document stating the Yanukovich’s renunciation of the state security services at his hand. The reports were delivered to General Shaportov. He is in the Crimea now.

Six officers of the SSA return to Kyiv to continue their service, and fifteen of them stay with the runaway number one. They settle at one of the Russian holiday houses not far from the most popular Crimean restaurant “Tifliss”. The locals call it presidential. Kuchma and Putin liked to have their meal here, and Yanukovych also often visited the place. One of its managers conducts a tour for us as the restaurant clients and tells how the first persons usually are guarded during their visits.

They usually choose this place. This is the center table of Akhmetov and all of them. Beyond this road in those bushes snipers hide. At such a distance they control everything taking place here. The signal is jammed. The telephone – pooh – and that’s it. Besides, 20 road police engines. People are not let in, everything is blocked.

They say before the flight to Russia the runaway-President also ordered meal from here, and his younger son came with his wife for dinner.

At that time the acting chief of the Ministry of the Internal Affairs Avakov and the Head of the Security Service of Ukraine Nalyvaichenko chase after the runaway-President.

Both of us took a plane and tried to detain him in the Crimea. It happened one night before the appointment. He was screened and taken out via Sevastopol.

Yanukovych is taken out from Yalta along the narrow road – it is about 90 kilometers to Sevastopol. Any police patrol could intercept his motorcade consisting of three cars already. The ex-chief of the SSA Kulyk is confident that it has not happened because there have been no grounds for that.

Nor Avakov neither Nalyvaichenko had any grounds to detain the President incumbent at the moment. With all due deference to both of them – they had no legal grounds. They speak now that somebody should have detained him, but the detention had to be pursued legally and then one could speak about something. Can you see? What were the grounds for Yanukovych’s detention at that moment? He left easy.

Kozacha bay. Yanukovych and company have been met by marines of the 810-th marines separate brigade of the Black Sea Fleet, taken on board of the storm-boat and in 24 hours he reached Novorossiisk land.

Where did helicopters and the jet disappear, with the help of which Yanukovych tried to leave Ukraine? We find out unbelievable thing –TSN receives an official answer form the Donetsk airport: all the air vehicles of the ex-President have left their airfield.

Where did these aircrafts go? Nor State Aircraft Service of Ukraine neither Ukrainian Air Traffic Service managed to answer us within a week. Three years ago journalists of Ukrainian Pravda found out that these aircrafts belonged to Centeravia Company connected to Yanukovich family. I contact the director of the company Pavlo Kovaliov and introduce myself as a businessman who is eager to rent Yanukovych’s helicopter.

They are beyond the bounds of Ukraine because of the maintenance works, it is impossible at the moment. I simply cannot help you, let us try at the end of the month.

Our sources help us to uncover even the more unimaginable thing: from the 12th till the 19th of March the aircrafts of Yanukovych making their way out of Donetsk airport unimpeded one after another left for Europe. The jet “Falcon 900” left for France for maintenance works. Two helicopters “Agusta-139” flew to Moldova and Romania where they were refueled and then set off for Switzerland in order to get maintenance works. At the end of March all of these aircrafts came to Moscow – to the most expensive aircraft platform in Vnukovo-3. This has been confirmed in the supervisory service of the Moscow airport after we introduced ourselves as the associates of the Centeravia Company.

Your helicopters, they are at the site, everything is OK. They are even in the hangar, as far as I remember, it’s warm and dry. – Is Falcon also in it? – It is somewhere here, by us, that’s all I can tell you.

Two helicopters and the jet are material evidences of Yanukovych’s flight. This property costs tens of millions of dollars. Why has it not been arrested according to the six criminal cases against the ex-President-runaway? Who made it possible for the aircrafts to leave Ukraine? Official inquiries sent by TSN-Week to the Ministry of Internal Affairs, The Security Service of Ukraine and the Prosecutor’s General Office have not been answered yet. We are waiting for the answers.

Video TSN
If you see a spelling error on our site, select it and press Ctrl+Enter
Latest news