Fighters fiercely fire at bus and cars near Novoajdar. There are victims – mass media

Terrorists fiercely fired at the bus and cars, which did not stop near a roadblock of fighters near Novoajdar. 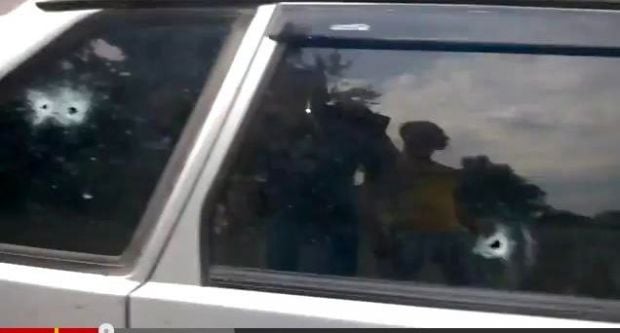 Fighters fiercely fire at bus and cars near Novoajdar. There are victims – mass media/Screenshot of video

The bus, which made a voyage Luhansk-Severodonetsk, got under firing of terrorists in a district of railway crossing in Novoajdar. “Segodnya in Severodonetsk” edition got information about events from two sources – one of the passengers of the bus and local residents.

In the evening on May 26, about at 18.15 pm two cars outrun a bus. Cars drove at speed of 100km/h and did not reduce it before some roadblock. Passengers did not understand whose roadblock it was, but it did not belong to the National Guard, because there was no Ukrainian flag there. People from this roadblock started firing at cars in pursuit, shot through the wheels and cars stopped. Injured people started crawling and jumping out of the cars. Fighters in camouflage and masks pursued them and put them with the face down to the ground. After than fighters started firing at the bus, which arrived, and it also stopped.