Poroshenko answers those, who demand “tough” and fact military actions in east

President of Ukraine Petro Poroshenko believes that a beginning of a dialogue in east of the country is a positive fact. 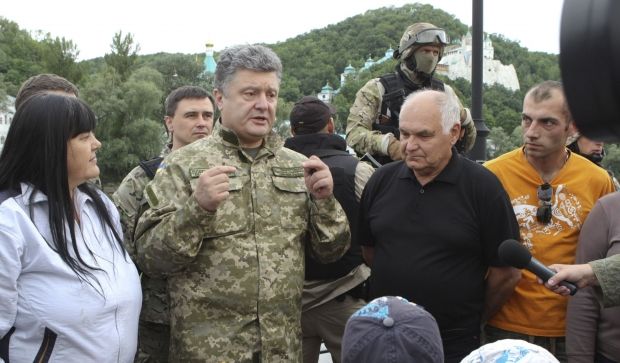 Poroshenko answers those, who demand “tough” and fact military actions in east/REUTERS

According to an UNIAN correspondent, he said this, delivering a speech at the meeting of representatives of local self-governmental bodies and state power bodies “Day of dialogue”.

“I know that the sheer fact of these consultations sparked multivalued reaction in society. There are “hawks”, who demand fast tough military actions. Others demand scale compromises “just to prevent a war”. I will answer both sides: our goal is not a war, not we, not Ukraine of its beginning. Our goal is a peace. But I stress: a peace is not at all hazards and not under all conditions. We will not hesitate to repulse adequately armed aggressor, who encroaches on unity and integrity of our state”, - said Poroshenko.

Poroshenko noted that he had to made a rather difficult decision on unilateral cease-fire in east of Ukraine.

“A dialogue on implementation of presidential plan on settlement of the situation in Donbass has started”, - said Poroshenko and he reminded that the peace plan consists of 15 items and one the main item is an immediate demilitarization of the region and a renewal of control over the Russian-Ukrainian border.

According to his words, among priority steps of the peace plan are renewal of activity of local power bodies, renewal of central television radio broadcasting in the Donetsk and Luhansk Oblast on order to prevent “information poison that is flowing from other television channels”.

Also Poroshenko said about other items of the peace plan including restoration of economics, providing employment in Donbass, renewal of dwelling and service buildings damaged as a result of armed conflict.

The President reminded that all international institutions supported this peace plan.