Children in Russia are frightened by me - Tymoshenko 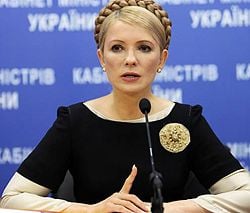 Prime Minister of Ukraine Yulia Tymoshenko is not to prevent the entrance of Russia in the World Trade Organization after the Ukrainian side signed the protocol on joining to the WTO.

“Till I head the government, Ukraine will not create obstacles for Russia on entrance to the WTO, quite the opposite, we will promote. I know that even children in Russia are frightened by me. Propaganda has been working for this image for a long time. This is the consequence of the interior political struggle in Ukraine. Without any hesitation I will change this mistaken perception”, said Yu. Tymoshenko in the interview to Vedomosti newspaper on the eve of the visit to Moscow.

The Ukrainian Prime Minister confirmed one more time her position concerning the mediators by gas supplies from Russia.

“Dishonest businessmen and politicians have accused me for many years of all mortal sins. But I am just against any mediators. At the beginning of 1990es Russia and Ukraine were involved into the crisis of non-payments, the industry stagnated and uniting links were needed in order to restore the flows of commodities. These occurrences do not take place now that is why the mediators are not needed”, Yu. Tymoshenko thinks.

The representative of the press service of the Russian government disclosed to journalists that Prime Minister of the RF Victor Zubkov will discuss the conditions and the perspectives of the bilateral trade – economic cooperation with the Prime Minister of Ukraine in Moscow.

As it was reported earlier, the visit of Tymoshenko to Moscow is scheduled for February 21.