“Some 99% of Ukrainians do not care a damn, sorry for non parliamentary vocabulary, for NATO issue”, said the Speaker of the VR. 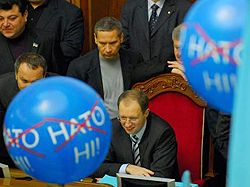 Speaker of the Verkhovna Rada of Ukraine Arseniy Yatsenyuk calls upon all the political forces to concentrate their attention on studying the social issues and after that to get down to the political issues.

According to an UNIAN correspondent, he said this at the meeting with the parliament members from the BYUT faction today.

A. Yatsenyuk underlined again that the VR will not imitate its work. He noted that he will not enter to the session hall in the case of further blocking of the VR’s work. “Clownery and menagerie finished”, said A. Yatsenyuk.

He noted that the VR should concentrate on the fulfilling the economic and social reforms.

Explaining his position, A. Yatsenyuk said about the results of the poll on the relations of population towards NATO issue. “Some 99% of Ukrainians do not care a damn, sorry for non parliamentary vocabulary, for NATO issue”, said the Speaker of the VR.