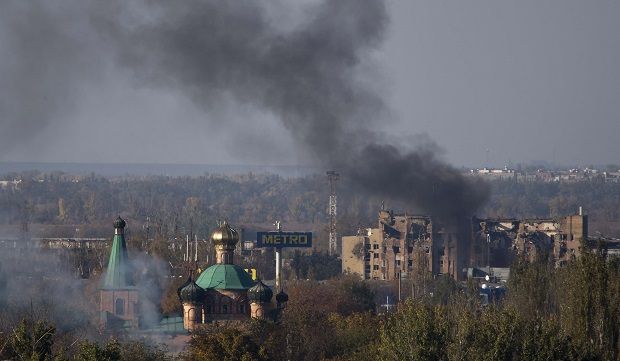 “Two civilians sustained injuries of varying severity and were hospitalized on October 13 in Donetsk,” the press service said.

The militants shelled the Kievskiy and Kuibyshevskiy districts of the city, the city administration said. It said an administrative building on Vakhrusheva Street was completely destroyed by a shell.

The Northern water plant in Kievskiy district also came under heavy fire. The plant staff took shelter, and managed to avoid being injured. Due to their professional action, the staff was able to ensure that the plant remained operational and continued to supply water, the administration said. The windows in the equipment, chlorinator and switching rooms were again damaged by shells. As there were unexploded shells at the plant, State Emergency Service specialists had to be called in.

As of 1000 on Tuesday the situation in the city remained tense. Local residents reported artillery fire and explosions being heard in Kirovskiy, Kievskiy and Kuibyshevskyi districts. Utility service providers are operating normally, and Donetskgorgas (Donetsk State Gas PJSC) staff is planning to do some work in Kirovskiy district.

State Emergency Service pyrotechnicians have provided gas workers access to the gas distribution center at Troianda state-owned farm, which was previously mined. However, it is still impossible to carry out repair work in private residential buildings located close to the airport, which has been under siege by the militants for more than a month.

Since the military conflict started in Donetsk, 149 kilometers of the gas network have been damaged. On October 13, maintenance crews from Voda Donbassa utility company were able to gain access and repair a damaged water pipeline 1,400 mm in diameter. At present, specialists are checking if the water pipeline has sustained any other damage before putting it back into operation.

Once the water pipeline recommences operation, it will provide a stable water supply to Kuibyshevskiy and Leninskiy districts, parts of Petrovskiy district, as well as to the residential areas of Tekstilschik, and the Abakumov and Biriuzov mines in Kirovskiy district. Yesterday, water was supplied to these districts only in the evening hours, and in reduced quantities