In Luhansk more than 100 soldiers surrounded by militants, some killed, captured 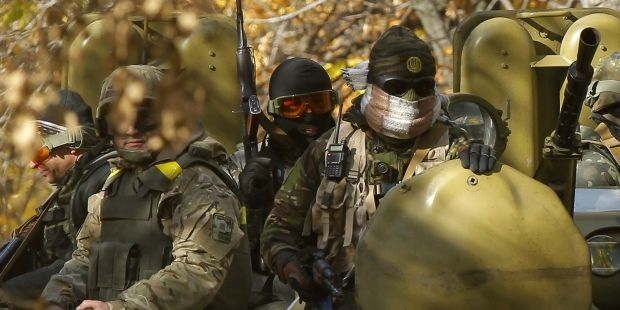 Ukrainian armored vehicles have been destroyed, and soldiers killed, wounded and captured, Luhansk Region Governor Hennadiy Moskal wrote on his page on Facebook on Wednesday morning.

"On Tuesday, October 14, constant clashes continued between the Ukrainian security forces and the terrorists in the area of ​​the Bakhmutka road in Luhansk,” Moskal said.

“Our positions were attacked by militants of the so-called 32nd Separate Cossack District of the Don Cossacks, under the command of [Pavel] Dremov, who are dug in in a wooded area and who are armed with about 20 tanks and two dozen other armored vehicles," he said.

He said that yesterday from 0800 to 0840 and then from 1010 there had been continuous mortar and small arms attacks on a National Guard checkpoint No.32 near the village of Smile in Slavyanoserbsk district.

"At 1045 there was a clash between the militants and the 24th brigade of the Ukrainian Armed Forces, who had come to the aid of the National Guard checkpoint,” Moskal said.

“Our side has lost some armored vehicles. At about 1500, a group from the 80th Airmobile Brigade, which had come to help the National Guard, was ambushed. Information about the dead and wounded is being clarified. From 2000 to 2030, the insurgents fired mortars at a position held by the 128th Brigade near the village of Chornuhino in Popasnyanskiy district. At 2130 there was again some shelling. There were no losses on our side.”

Then after midnight the militants attacked a Ukrainian army checkpoint near the village of Zolotoye in Popasnyanskiy district, Moskal said. Just after 0200, the gunmen opened fire and then surrounded the area around National Guard checkpoints Nos. 31 and 32 near Bakhmutka. Fighting broke out.

There is no firm information about the situation at Bakhmutka this morning. It is known that 112 soldiers of the Ukrainian army and National Guard have been surrounded. Several wounded and shell-shocked soldiers have been captured, including a battalion commander. The situation can be described as critical. It is impossible to obtain specific information about the number of dead and wounded and losses of armored vehicles, as constant bombardments from the militants’ heavy artillery, which is entrenched in nearby woodland, prevents access to the area.

Attempts by Organization for Security and Cooperation in Europe representatives to negotiate a ceasefire by phone with the leaders of the self-proclaimed Luhansk People’s Republic (LPR) were unsuccessful. The “Army of the Don” militants are not following the orders of the LPR and act at their own discretion, Moskal said.