Poroshenko meets with Putin in Milan 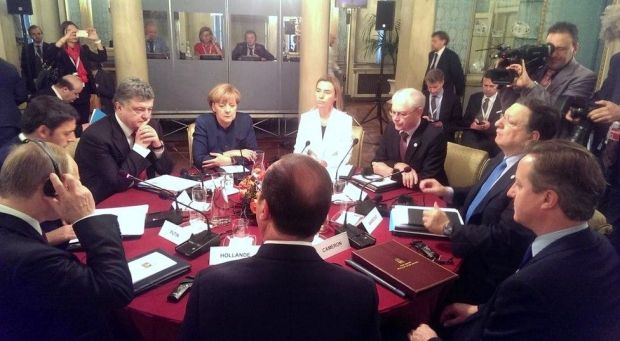 The meeting lasted for one hour and thirty minutes, according to Russian news agency RIA Novosti.

Renzi spoke to journalists after the meeting, saying that the talks had been constructive, but that “big differences” remained between the two sides, the BBC reported.

Russia continues to deny being a party to the conflict in Ukraine, although it is widely believed that direct intervention by Russian regular troops in eastern Ukraine at the end of August halted the advance of Ukraine’s forces just as they were about to crush the insurgency, and forced Kyiv to sign up to a ceasefire deal in Minsk on September 5.

Although a ceasefire is formally now in place, it has been breached on an almost daily basis, notably through frequent attacks by the Russian-backed militants to try to dislodge Ukrainian forces from Donetsk Airport, which Ukrainian forces have held since late May.

The OSCE on Thursday also confirmed a violation of the ceasefire by militants in Luhansk region, who surrounded and attacked Ukrainian checkpoints about 40 kilometers to the north-west of the city of Luhansk.

Ukraine’s forces have also been accused by the militants of violating the ceasefire and firing on residential areas in Donetsk. Kyiv says its soldiers have been ordered only to fire if they are first fired upon.

The EU and the U.S. government say Russia has been aiding the insurgents in eastern Ukraine by supplying them with arms, ammunition and fighters – a claim Russia denies. Western leaders have urged President Putin to observe the conditions of the Minsk Protocol on ending the conflict in eastern Ukraine – a condition for the relaxation of Western sanctions against Russia that were imposed after Moscow's illegal annexation of Crimea and suspected military incursions in eastern Ukraine.