Away with Sytnyk: UkrLandFarming to congratulate NABU director on 6th anniversary of tenure

Over a decade, the agricultural holding has invested over US$3 billion in the Ukrainian economy

Ukraine's largest agricultural producer, UkrLandFarming Agro Holding, which accuses Director of the National Artem Sytnyk Anti-corruption Bureau of Ukraine (NABU) Artem Sytnyk of destroying 29 farms and 12 poultry farms over his personal revenge on the holding's shareholder, says it has launched the production of 1 billion eggs with the marking, saying "Away with Sytnyk." In such a way, the holding's employees decided to congratulate the NABU director on the 6th anniversary of his tenure.

That is according to a statement by the employees published on the company's website on April 28. "[Orthodox] Easter is one of the main holidays for every Ukrainian citizen, as well as for thousands of employees of our company. This year, we are fewer in numbers, as 13,000 of our coworkers have lost their jobs. Another sad news is that this year, the Easter basket for all Ukrainians has risen in price significantly," the statement said. "And it happened because of a corrupt official, namely NABU Director Artem Sytnyk. Because of his personal revenge on our agricultural holding's shareholder, Oleg Bakhmatyuk, and pressure on UkrLandFarming's enterprises on the part of NABU, 29 farms and 12 poultry farms have been shut down. Some 13,000 Ukrainians have lost their jobs, the country's budget has fallen short of UAH 1.5 billion [US$54 million] in taxes, and eggs have risen in price because their production in Ukraine shrank significantly."

Just a year ago, about 30,000 Ukrainians worked at the holding's enterprises. Over a decade, the agricultural holding has invested over US$3 billion in the Ukrainian economy. Moreover, in the last three years alone, it has paid about UAH 7.7 billion in taxes. "But for five years now, we have been facing unprecedented pressure on our company from officials. It is in NABU's powers to prosecute top officials on suspicion of committing corruption, but NABU is fighting us rather than fighting dishonest officials. NABU's war with agrarians is the result of a personal conflict between Artem Sytnyk and a shareholder of our company," the agrarians said.

Over the recent five years, NABU has initiated various cases against the agricultural holding and its shareholder. In particular, [the case] on suspicion of allegedly illegal VAT refund during the construction of two poultry farms, namely Avis and Chornobayivska. At the same time, NABU "did not notice" the existence of these large-scale enterprises in Europe. Then there was a case against the former acting head of the NBU (National Bank of Ukraine), Oleksandr Pysaruk, and shareholder of the company Oleg Bakhmatyuk. "It is connected exclusively with one fact: NABU director Artem Sytnyk has a direct conflict of interests. He was found guilty of committing a corruption offense by the rulings of the courts of all instances, and the main witness of the prosecution in the courts was the advisor to the sister of our shareholder, Oleg Bakhmatyuk," the company said. "Now NABU attributes our shareholder NABU to the case against ex-official [Roman] Nasirov, which is absurd at all. All this is being done with only one purpose – to destroy us, so that Sytnyk would thus take revenge on our shareholder. Therefore, we won't be surprised if we are persecuted in all cases initiated in the country that NABU could only think of."

"While these days all Ukrainians are getting ready to celebrate the bright Easter holidays, Artem Sytnyk loudly celebrates six years of his tenure as NABU director. We, the employees of the agricultural holding, whom NABU director Sytnyk has not yet managed to leave without job, would like to congratulate him the way we can on this anniversary of intimidating Ukrainians. So, 1 billion eggs with marking "Away with Sytnyk' will appear on the shelves of Ukrainian stores. We've already started their production at those two largest factories in Europe that NABU for some reason does not notice. Let each of these eggs be a reminder to all Ukrainians who are to blame for the fact that the Easter basket for Ukrainians has risen significantly in price, that thousands of people lost their jobs, and the state fell short of huge funds." 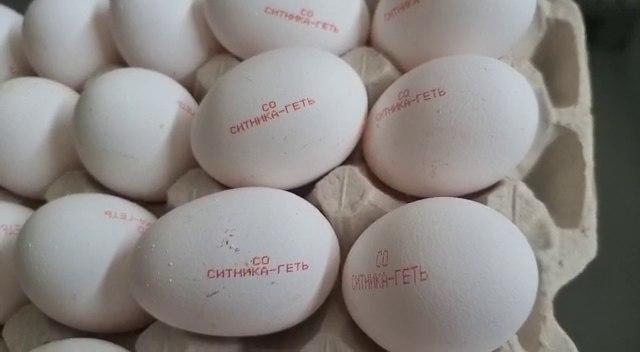