The human rights community says it is likely that the reported has been tortured while in custody. 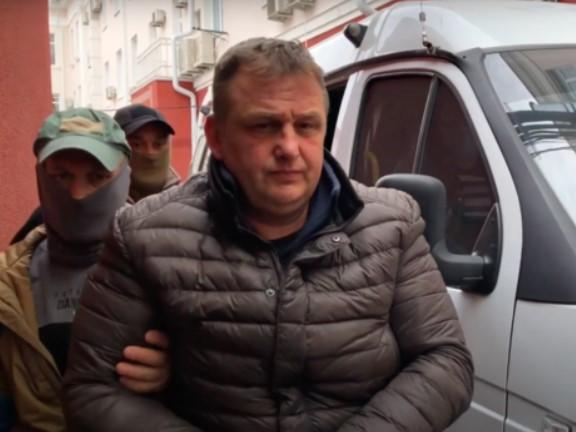 Kateryna Yesypenko, the wife of Ukrainian journalist Vladyslav Yesypenko, who was unlawfully arrested in Crimea, says she fears for her husband's life, an UNIAN correspondent reported from a Kyiv press conference Friday, March 19.

Chair of the board of the Crimean Human Rights Group (CHRG) Olha Skrypnyk recalled that lawyer Emil Kurbedinov was not allowed to see Yesypenko, while another lawyer, Violetta Sineglazova, had been appointed to represent him without his consent. Rights activists accuse her of cooperating with the FSB and supporting prosecution, not her clients.

"She always represents the interests of the investigation, not a defendant. She essentially helps the investigation and puts pressure on people so that they admit whatever the FSB wants," Skripnik said.

Read alsoLithuanian president in Rada: Crimea is Ukraine (Photo, video)She added that Yesypenko yesterday was "interviewed" by a "journalist" with the Kremlin-controlled media.

There were also signs of beatings on his face and neck.

She also said that the words that the journalist used in the "interview", he never used in real life.

"This isn't the first time I'd like to declare that I fear for my husband's life, especially after yesterday's video. This video is yet another proof of beatings, torture and humiliation. This fact also confirms hindered access of two independent lawyers to my husband," she said.

Yesypenko said that on March 16, within an hour after the Russian FSB released a report on her husband's arrest, he called her on the phone.

The husband said that he can only speak on domestic topics, while his voice, the wife said, was neutral and lacking any emotion.

He also said he couldn't answer the question as to whether he had been beaten.

The journalist also said that he was aware of lawyer Sineglazova being appointed, and claimed he had turned down services of Mr Kurbedinov.

Yesypenko's wife added that her husband said the FSB detectives had allowed her and her daughter to meet him. However, given his tone and his voice, she interpreted his words as a warning to actually not come.

According to Skrypnyk, phone calls and visits are usually not allowed in such cases just like that, so this could be regarded as a form of psychological pressure.

She stressed that after watching the video of the "interview", rights activists don't rule out that Yesypenko had been tortured.

The head of the Crimean Human Rights Group (CHRG) noted the political nature of the case.

She also called on the President, the Ministry of Foreign Affairs, and the Ministry for Reintegration to apply all tools available to secure Yesypenko's release.

Yesypenko's colleagues present at the press conference urged the media not to ignore the issue and continue covering it as the efforts to save his health and life require keeping the case high-profile.

Speaking at a presser, Kateryna Yesypenko called on President Volodymyr Zelensky and the international community to contribute to her husband's release.

Their family left the occupied Crimea in 2015, the detainee's wife said.

She said her husband then decided he couldn't stand aside what's happening and eventually started covering the Crimea events for the press, working with RFE/RL's project "Crimea.Realities".

After her husband went missing, Yesypenko turned to relevant agencies, including to the Prosecutor's Office of the Autonomous Republic of Crimea, the Office of the Verkhovna Rada Human Rights Commissioner Liudmyla Denisova and her Russian counterpart Tatyana Moskalkova.

Read alsoFSB designing background Kremlin needs to "celebrate" Crimea grab anniversary – Ukraine intelligenceThe Prosecutor's Office of the ARC and Liudmyla Denisova has returned her queries, but no response has yet been received from Tatiana Moskalkova.

Yesypenko noted that her husband had his birthday on March 13, but she could not pass him their daughter's drawing with greetings, which she showed at the press conference, as well as her letter, due to the fact that the lawyer she hired is not allowed to see Yesypenko.

"I want to appeal to everyone who can help and bring closer the release of journalist Vladyslav Yesypenko. The President of Ukraine, ombudspersons, and international organizations – I ask everyone for help..." she said.

Detention of Vladyslav Yesypenko: what is known

On March 10, in the temporarily occupied Crimea, Russia's FSB detained two participants in the rally marking the birthday of Taras Shevchenko, held in Simferopol the day before.

Contact with Yelizaveta Pavlenko and Vladyslav Yesypenko was lost on the evening of March 10.

Later it became known that the two were detained by the FSB.

Pavlenko was later released following a search in her home where computer equipment and personal belongings were seized.

Yesypenko was taken to a pre-trial detention center in Simferopol. He was charged with illegal manufacture, processing or repair of firearms,, as well as illegal manufacture of ammunition). Charges imply imprisonment for up to five years. The defendant shall be remanded in custody until May 11.

Later, the invaders added to the charges suspicion of espionage.

Lawyer Emil Kurbedinov, with whom Yesypenko's wife stroke a deal, is not allowed to see the defendant.

Subsequently, RFE/RL announced that Yesypenko had been cooperating with their project Crimea.Realities.