IAEA to talk issues of nuclear sites in Crimea, Donbas only with Ukraine

Ukraine's top diplomat met with the IAEA director general during the latter's first visit to Ukraine in 10 years. 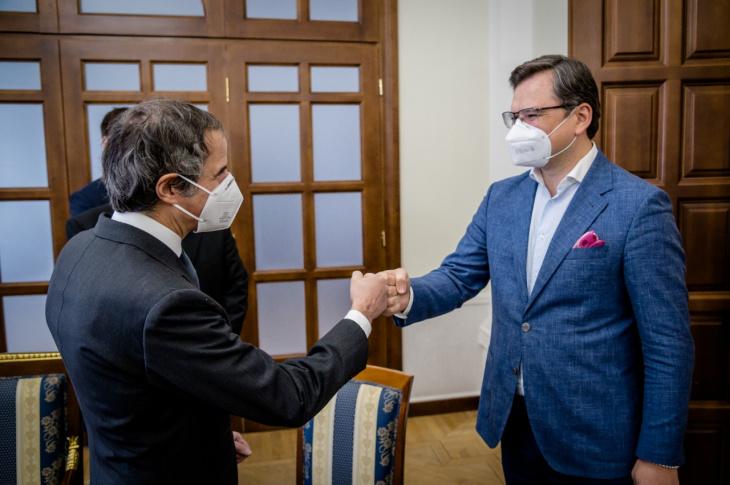 The International Atomic Energy Agency will only discuss with Ukraine the issues related to all nuclear sites located in the temporarily occupied territories of Donetsk, Luhansk regions, and Crimea, recognizing Ukraine's sovereignty over the said territories.

Read alsoUkraine marks 35th Chornobyl anniversaryThe head of the Ukrainian Foreign Ministry and the head of the IAEA met in Ukraine, during Grossi's visit, first in the past ten years.

According to the report, the parties discussed the application of IAEA safeguards to all nuclear sites on the territory of Ukraine, including in the temporarily occupied territories, in accordance with an agreement sealed between Ukraine and the Agency.

The parties exchanged views on a number of issues on the international agenda and positively assessed the high level of contact on bilateral cooperation issues: from overcoming the COVID-19 pandemic to cancer treatment.

The minister praised IAEA's long-term support of Ukrainian government's efforts to tackle the Chornobyl disaster fallout. The director general assured that the Agency would further continue the successful cooperation.

It is noted that on April 26-27, the IAEA chief is scheduled to participate in events marking the 35th anniversary of the Chornobyl disaster, as well as meet with President Volodymyr Zelensky, Prime Minister Denys Shmyhal, Deputy Prime Minister Oleksiy Reznikov, and heads of relevant organizations and agencies working in the field of nuclear energy.

The International Atomic Energy Agency (IAEA) is an international organization that seeks to promote the peaceful use of nuclear energy, and to inhibit its use for any military purpose, including nuclear weapons, as per Wikipedia.

The IAEA was established as an autonomous organization on July 29, 1957.

It reports to both the United Nations General Assembly and Security Council.

If you see a spelling error on our site, select it and press Ctrl+Enter
Tags:CrimeaDonbasKulebaIAEA