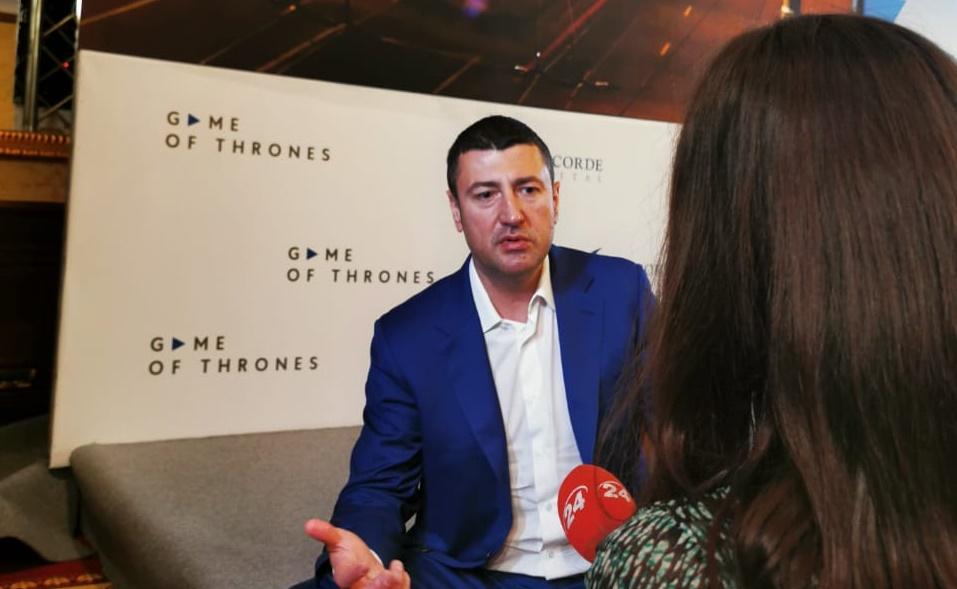 The National Anti-corruption Bureau of Ukraine (NABU) and the Special Anti-corruption Prosecutor's Office (SAPO) are not entitled to appeal against the ruling of the investigating judge of Kyiv's Pechersky District Court on relaunching criminal proceedings against Oleg Bakhmatyuk, the owner of UkrLandFarming agricultural holding.

This is stated in the conclusion of the Council of Scientific and Legal Expertise at V.M. Koretsky Institute of State and Law of the National Academy of Sciences of Ukraine, which is at the disposal of Dilova Stolytsia (DS).

In particular, this refers to scientific and legal expertise regarding the interpretation of Ukraine's criminal procedural legislation carried out in accordance with the Law of Ukraine "On Scientific and Scientific and Technical Expertise" at the request of the Attorney Association "Capital Law Company." 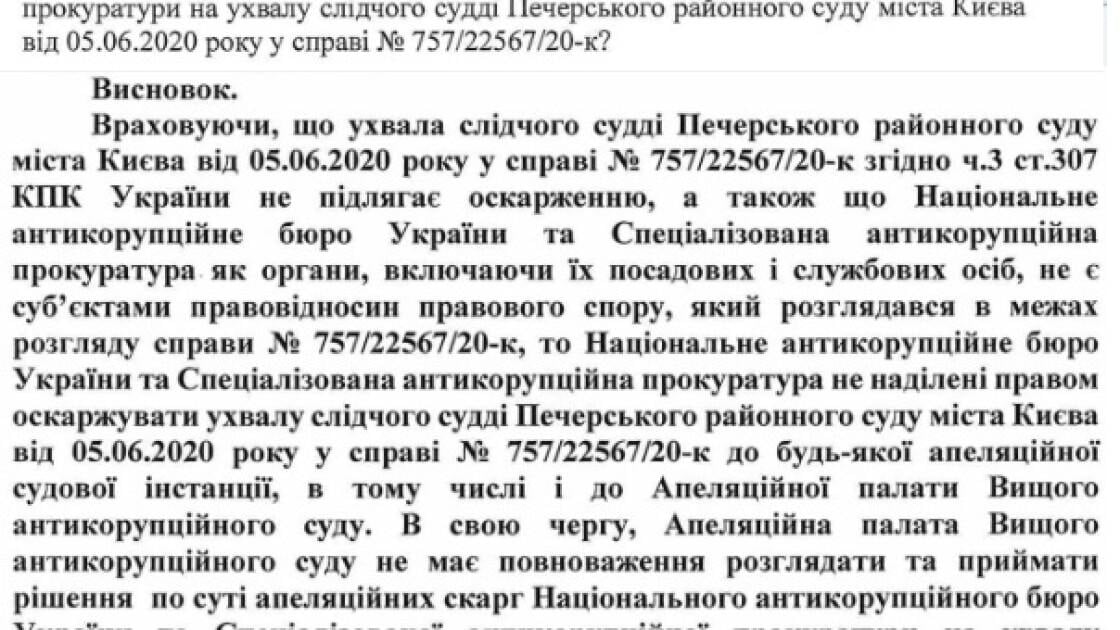 An expert from the Koretsky Institute was asked two questions. The first one concerned whether the Appeals Chamber of the High Anti-Corruption Court (HACC) is authorized to consider and decide on the merits of the NABU and SAPO's appeals against the ruling of the investigating judge of Kyiv's Pechersky District Court of June 5, 2020, in case No. 757/22567/20-k.

"Taking into account the ruling of investigating judge of Kyiv's Pechersky District Court of June 5, 2020, in case No. 757/22567/20-k in accordance with Part 3 of Article 307 of the Criminal Procedure Code of Ukraine is not subject to appeal, as well as NABU and SAPO as the bodies, including their officials and officers, are not subjects of legal relations in a legal dispute, which was considered in the framework of case No. 757/22567/20-k, NABO and SAPO are not entitled to appeal against the decision of the investigating judge of the Pechersky District Court to any court of appeal, including to the Appeals Chamber of the High Anti-Corruption Court.

Moreover, Institute expert M.I. Siriy said 'the Appeals Chamber of the High Anti-Corruption Court is not authorized to consider and decide on the merits of the NABU and SAPO's appeals against the ruling of the investigating judge of Kyiv's Pechersky District Court of June 5, 2020, in case No. 757/22567/20-k.'" 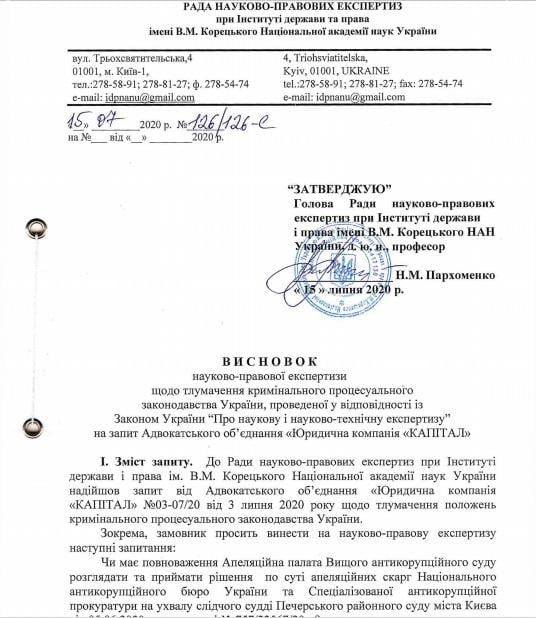 As reported by DS, on July 8, during a meeting of the anti-corruption meeting of the Verkhovna Rada regarding the case related to VAB Bank, NABU and SAPO representatives refused to comply with the ruling of the Pechersky District Court, saying they had filed an appeal with the Appeals Chamber of the High Anti-Corruption Court.

It is worth noting Kyiv's Pechersky District Court in June issued a ruling under which former Deputy Prosecutor General Vitaliy Kasko's resolution on relaunching criminal proceedings against owner of the UkrLandFarming agricultural holding Oleg Bakhmatyuk was ruled null and void as illegal. This refers to the resolution to reopen the criminal case on the refinancing of VAB Bank, which was earlier investigated and closed by the court's ruling over the lack of corpus delicti.

On June 25, the Office of the Prosecutor General complied with the decision of the Pechersky District Court and canceled the decision to relaunch criminal proceedings against Bakhmatyuk in the case of refinancing VAB Bank.

SAPO headed by Nazar Kholodnytsky had to put an end to this case. However, as of July 17, SAPO has not complied with this decision. In addition, NABU headed by Artem Sytnyk, who was suspected of corruption, also refused to comply with the above ruling of the Pechersky District Court.

The case against former Deputy Governor of the National Bank of Ukraine (NBU) Oleksandr Pysaruk and actual owner of VAB Bank Oleg Bakhmatyuk was opened due to the alleged misuse of refinancing funds provided by the NBU to VAB Bank during the 2014 banking crisis. However, findings of examinations of the Deposit Guarantee Fund and statements by the NBU confirmed that all refinancing funds had been spent for their intended purpose, i.e. they were received by bank depositors. In addition, Bakhmatyuk himself offered the state to return UAH 8 billion (US$293.4 million) of debts to the budget, but the businessman did not receive a response to his proposal from the NBU.

Memo. V.M. Koretsky Institute of State and Law of the National Academy of Sciences of Ukraine is a leading legal research institution in Ukraine. It was founded in 1949. Priority areas of fundamental research of the Institute are the following: problems of creating state and law in Ukraine: theory, history, practice; legal problems of democratization of public relations and the formation of civil society and the establishment and implementation of human rights and freedoms; theoretical and applied problems of the development of the legal system of Ukraine; theoretical and practical problems of the implementation of the Constitution and legislation of Ukraine; Ukraine in the system of modern international legal order and European integration: theory and practice; problems of encyclopedic legal research, philosophy and sociology of law. Since 1977, the institute has been the country's main institution on the problems of the theoretical basis for improving the legislation of Ukraine.