The delegate has uploaded on social networks a video of the incident. 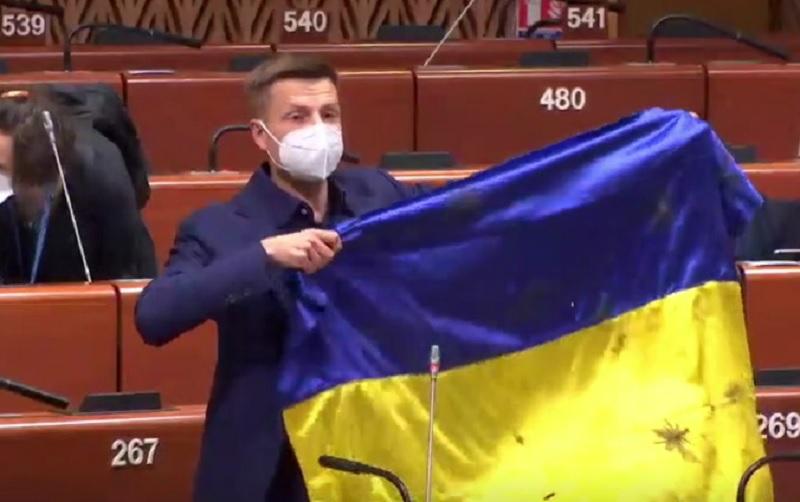 President of the Parliamentary Assembly of the Council of Europe (PACE) Hendrik Daems has warned member of the Ukrainian delegation to PACE, MP with European Solidarity Party Oleksii Honcharenko, of disciplinary sanctions as the legislator showed colleagues during his speech a national banner penetrated with bullets in the Donbas warzone.

"The strategic priorities of the Assembly were discussed at the PACE session today. I decided to remind that for some reason the draft report contains not a word about territorial integrity and sovereignty of Council of Europe's member states, about the peaceful resolution of conflicts in Europe. And this is happening at a time when the war is ongoing in Europe, in the east of Ukraine," he said.

During his address, Honcharenko unfurled the Ukrainian flag with holes in it pierced by Russian bullets.

"This was a flag of a soldier who fought in Donbas. And after that, PACE President Hendrik Daems interrupted my speech and threatened me with disciplinary sanctions," Honcharenko said in a post.

At the same time, he noted: "Mrs. Merkel during her speech today reminded that PACE is the 'conscience of Europe.' For how many Russian silver coins has this conscience been sold?"

Honcharenko posted a video of the incident.

PACE failed to include the issue of the Russian threat to peace in Europe in the agenda of its spring session, which kicked off in Strasbourg on Monday, April 19.

The Ukrainian delegation's proposal to put it on the agenda has been declined.

Head of the Ukrainian delegation to PACE, Maria Mezentseva, said now about 100,000 Russian soldiers are on the borders of Ukraine, and that the ceasefire in Donbas is constantly being violated.

Considering that the debate on the topic is not part of the agenda, she invited the PACE delegates to sign a statement on the build-up of Russian troops on the border with Ukraine.