The Embassy says the information mentioned in the inquiry mirrors Russian disinformation. 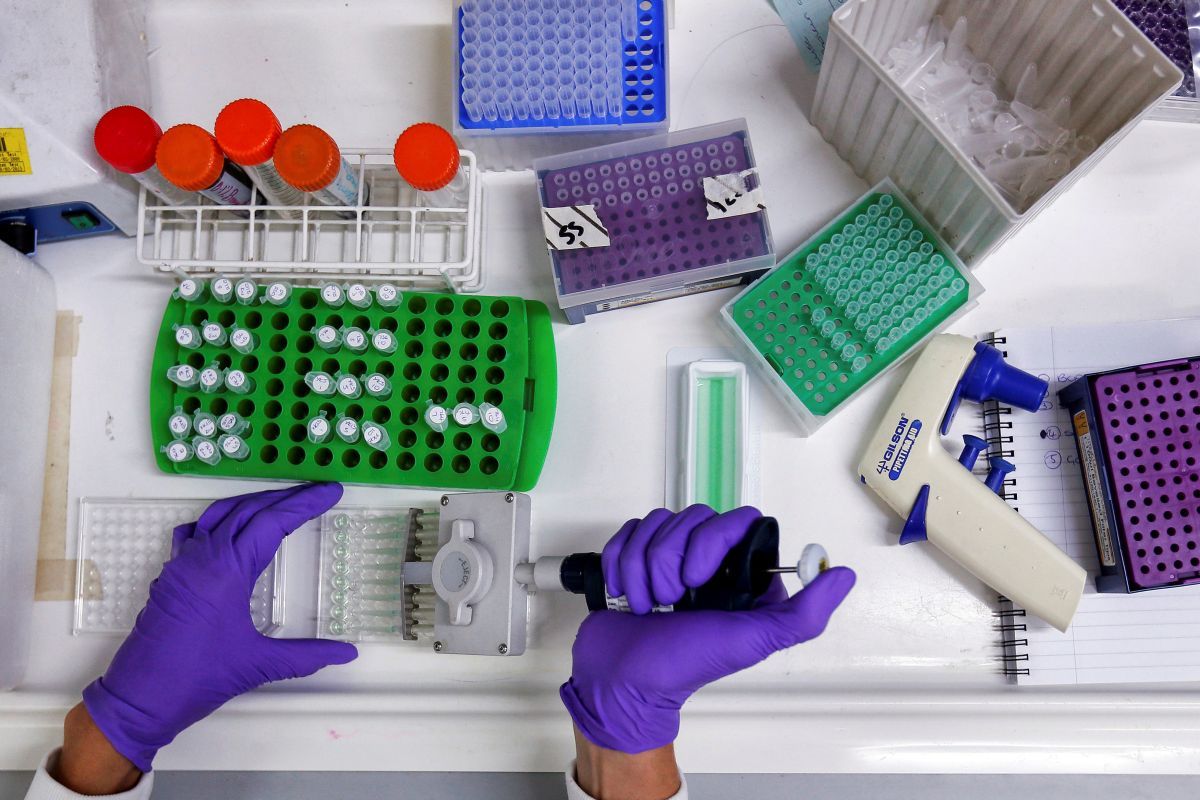 A coronavirus outbreak in Ukraine has raised the issue of U.S. virus research laboratories that work the country.

The U.S. Embassy in Ukraine has responded to a request made by lawmakers from the Opposition Platform – For Life parliamentary faction Renat Kuzmin and Viktor Medvedchuk. Recently, the two sent an inquiry to Ukrainian President Volodymyr Zelensky about 15 U.S. biological laboratories operating in Ukraine under Pentagon supervision.

On April 14, Kuzmin posted a copy of the request on his Facebook page. It says outbreaks of various viruses were recorded during these laboratories' work in Ukraine, which resulted in deaths.

At the same time, the Ukrainian authorities have already found violations in the work of these laboratories that could be the cause of virus leaks, the authors said.

The lawmakers reiterated the laboratories had started working during the governments of Viktor Yushchenko and Yulia Tymoshenko, then stopped when Viktor Yanukovych came to power, and resumed work under Petro Poroshenko's presidency.

In this regard, Kuzmin and Medvedchuk asked Zelensky to explain how these laboratories are financed and how the Ukrainian authorities control them. 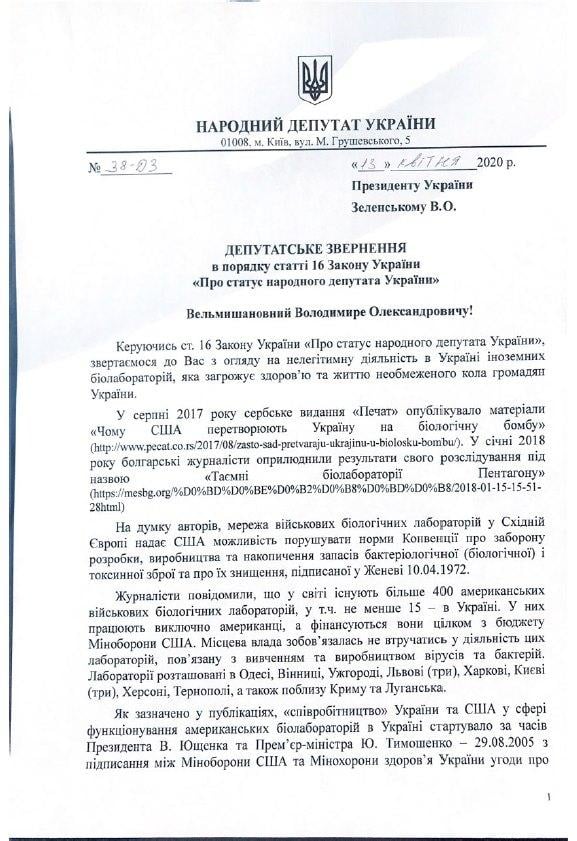 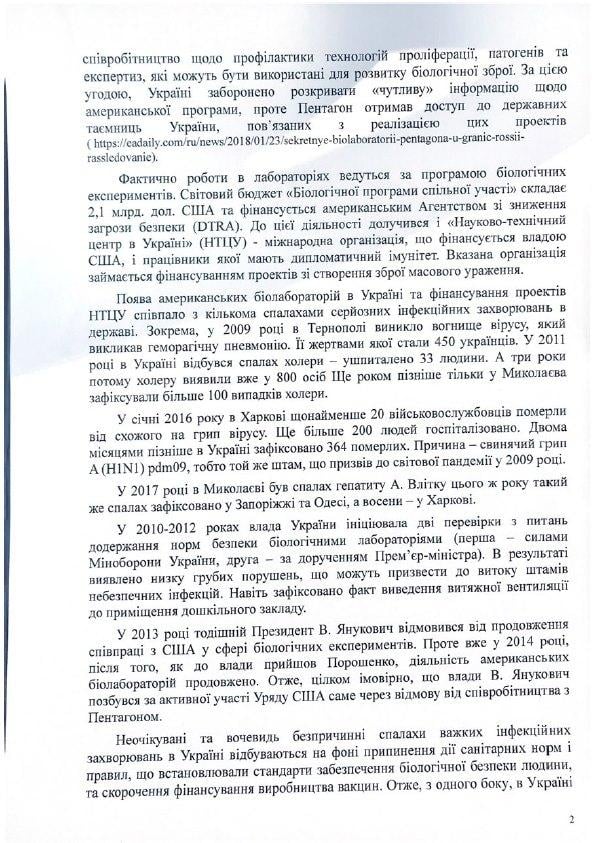 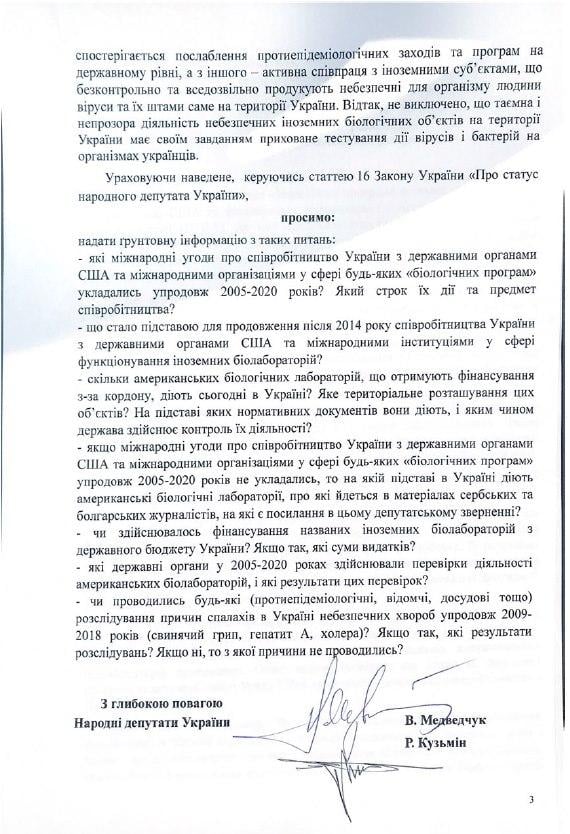 On April 22, the U.S. Embassy in Ukraine posted an official statement on this issue.

"Here in Ukraine, the U.S. Department of Defense's Biological Threat Reduction Program works with the Ukrainian Government to consolidate and secure pathogens and toxins of security concern in Ukrainian government facilities, while allowing for peaceful research and vaccine development," the Embassy said on its official website.

The Embassy reiterated the Science and Technology Center in Ukraine (STCU), an intergovernmental organization, was established by international agreement in October 1993. The current Parties to the STCU are Azerbaijan, the European Union, Georgia, Moldova, Ukraine, the United States, and Uzbekistan.

"Our joint efforts help to ensure that dangerous pathogens do not fall into the wrong hands. We're proud to partner with the Ministry of Health, State Service of Ukraine for Food Safety and Consumer Protection, National Academy of Agrarian Sciences, and the Ministry of Defense to make us all safer," reads the report.

The Embassy says the information mentioned by Kuzmin and Medvedchuk in the inquiry mirrors Russian disinformation.

If you see a spelling error on our site, select it and press Ctrl+Enter
Tags:UkraineUSEmbassylawmakerresearchrequestcoronavirus