The Venice Commission never gave an official opinion on the draft law in question. 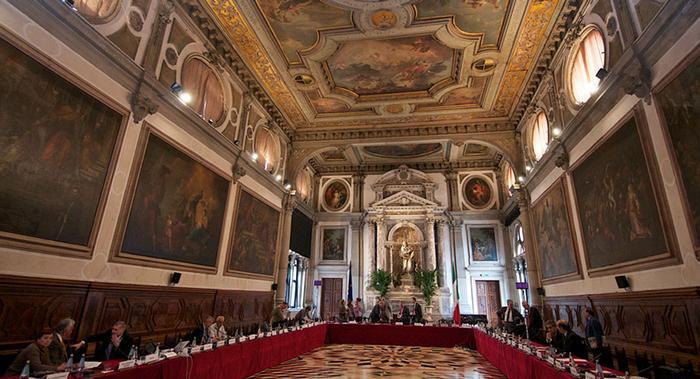 The letter on behalf of the heads of the Venice Commission and GRECO (Group of States against Corruption, a body of the Council of Europe) to the Chairman of the Verkhovna Rada Dmytro Razumkov on the bill on the dissolution of the Constitutional Court is not the draft law's full legal assessment.

That's according to a commentary by the Venice Commission Secretariat provided to Deutsche Welle.

If the Commission receives a relevant request, it will prepare the opinion, the commentary says, according to a report released in Ukrainian.

The letter from the heads of the Venice Commission and GRECO is an expression of concern about the possible developments, which may represent a very serious obstacle to the democratic functioning of Ukrainian institutions, the commentary adds.

The Ukrainian authorities should perceive it as a sincere offer to help in finding solutions that will be effective and at the same time respectful of the Constitution.

Read alsoCCU head Tupytsky not to be held liable for land deals with occupying authorities – political scientistIt is noted that the Council of Europe has long been consistently and persistently encouraging Ukraine to introduce effective mechanisms to combat corruption. The CoE continues to emphasize that the fight against corruption should remain a priority for the Ukrainian government. However, the fight against corruption and the rule of law cannot be separated, the commentary notes.

The termination of the mandate of Constitutional Court's judges in an unconstitutional way cannot lead to a culture of rule of law, which is necessary for an effective fight against corruption, the Venice Commission has added.

However, as explained in the commentary, the Commission has never provided any opinions regarding the judgments of the Constitutional Court, since such judgments must be respected and implemented.

The Venice Commission says it has repeatedly stated that decisions can be criticized, but political attacks on the Constitutional Court as an institution or on individual judges cannot be considered legitimate.

Separately, the Secretariat notes that judges of a constitutional jurisdiction body must respect the Constitution, as well as legal and disciplinary norms. And if they fail to do so, they can individually be held liable according to the current regulations.

The European Commission for Democracy through Law, better known as the Venice Commission, is a Council of Europe independent consultative body on issues of constitutional law, including the functioning of democratic institutions and fundamental rights, electoral law, and constitutional justice.

President of the Venice Commission Gianni Buquicchio and President of GRECO Marina Mrcela signed a letter to Parliament Head Dmytro Razumkov of Ukraine.

In the letter, they spoke against the bill, submitted by President Zelensky, on restoring public confidence in constitutional proceedings, which provides for the termination of powers of CCU judges.

Also, the CoE officials warned Ukraine of serious consequences if the bill passed the Rada.

If you see a spelling error on our site, select it and press Ctrl+Enter
Tags:ConstitutionalCourtVeniceCommissionGRECO