Zelensky at UNGA: "It's not just war in Ukraine, it's war in Europe"

Occupation of Crimea and military Russian aggression in Donbas prove that the tragic lessons of WW2 have not been learned, the Ukrainian leader noted. 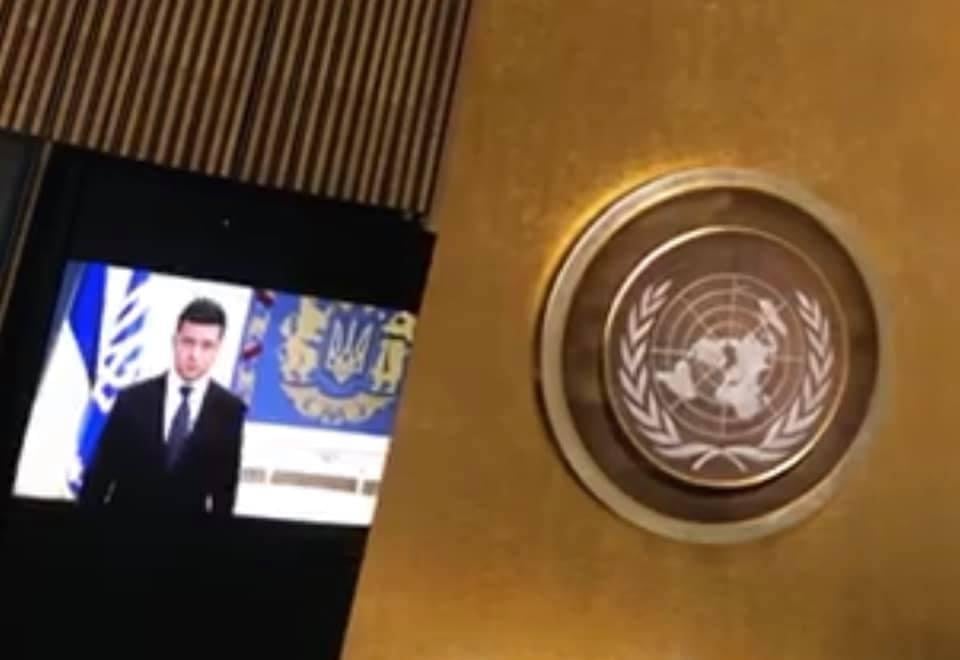 Ukrainian President Volodymyr Zelensky has addressed in a pre-recorded video statement the participants in the 75th United Nations General Assembly in New York.

Zelensky recalled the "difficult and unstable post-war times" that united the UN founders and prompted them to "put aside the contradictions in order to build a better world" where "peace, respect and the rule of international law, human rights and the truth" would prevail, according to an UNIAN correspondent.

At the same time, "regrettably," Zelensky says, "we have to acknowledge that the world of the 21th century is full of conflicts, aggression, dictatorship, and human rights violations."

The humankind "should have learned the tragic lessons of World War 2," the Ukrainian president stressed.

"But occupation of Crimea and military Russian aggression in the Donbas prove that these lessons have not been learned," the statement says.

Zelensky has reminded that "it's not only and not just war in Ukraine."

"It's war in Europe," the Ukrainian leader has stressed.

"And it's not just an encroachment on the sovereignty of an independent state. It's like an attempt to return to division of spheres of influence in the world," Zelensky said.

"The world we live in today is as challenging as it was 75 years ago. Peace and prosperity remain the values people are shedding blood for in different corners of the world," the president went on to say, noting that humankind "has climbed highest peaks, dived into deepest trenches, conquered the space, and even with the help of modern technologies can hold UN meetings remotely."

"Are we really incapable of stopping aggression and wars?" he appealed. "Do we need more bloody lessons to rethink our being on this planet?"

Zelensky underlined that this year, amid the coronavirus pandemic, "we should use this warning sign to stop controversies and join efforts for achieving real, groundbreaking results – not only come back to the purposes and principles of the UN Charter but to start their permanent and full implementation."

"Let's start now. There is no Planet B. We live here and only once," Zelensky concluded.

If you see a spelling error on our site, select it and press Ctrl+Enter
Tags:UnitedNationsRussianAggressionUNGAZelensky