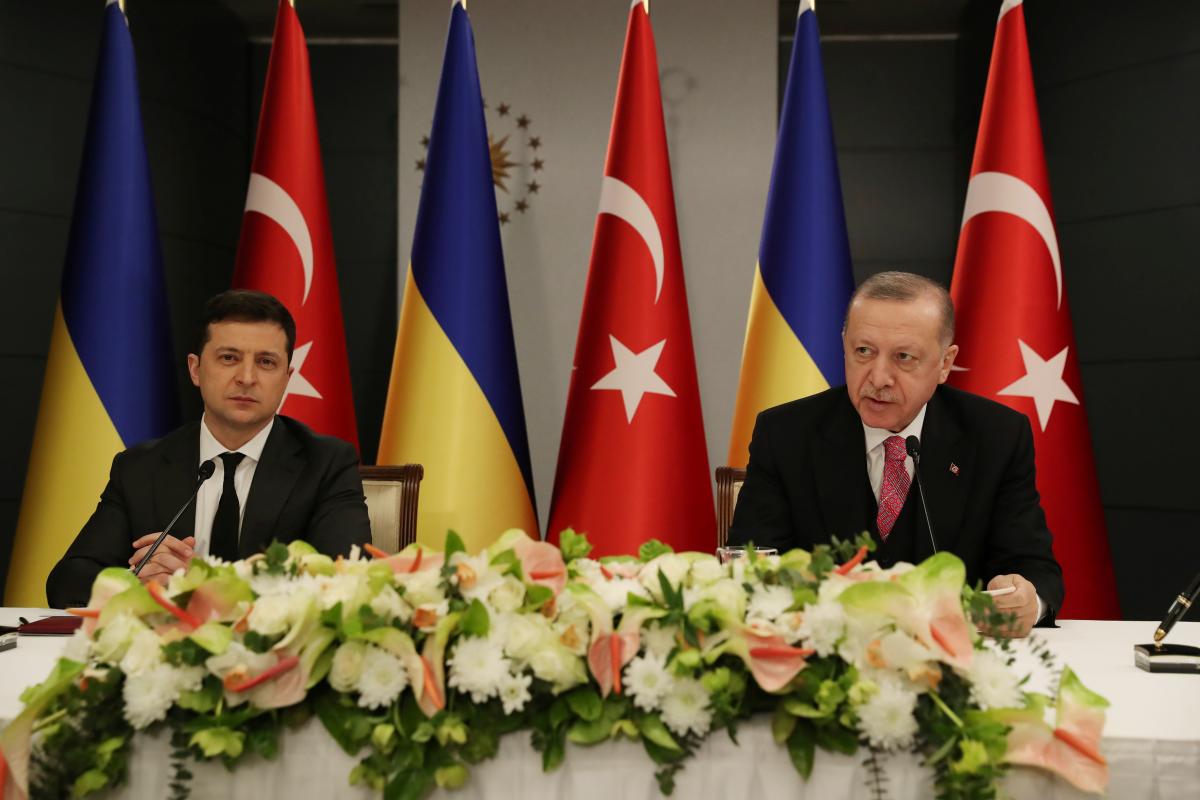 Ukrainian President Volodymyr Zelensky notes that Ukraine and Turkey have a common vision of responding to threats in the Black Sea region.

"First of all, we thoroughly discussed security issues and joint counteraction to challenges in the Black Sea region, and it is worth noting that the Kyiv and Ankara have a common vision both with regard to the threats as such and with respect to the ways to properly respond to these threats," Zelensky said at a joint press conference with Turkish President Recep Tayyip Erdogan in Istanbul on Saturday, an UNIAN correspondent reports.

The head of the Ukrainian state noted the great importance of Turkey's support toward the restoration of the sovereignty and territorial integrity of Ukraine.

"I was happy to hear from Mr. President the words on the continuation of such important support and the invariability of Turkey's position in the future," Zelensky said.

Zelensky said he had informed the Turkish side in detail about the situation in the temporarily occupied territories of Ukraine – in Crimea and certain areas of Donetsk and Luhansk regions, including the ongoing militarization of Crimea and the violation of human rights on the peninsula by Russia.

In turn, Erdogan said he stood for de-escalation in the Black Sea region.

"Our main goal is to preserve the Black Sea as a sea of ​​peace of calm and stability. In no case do we want a higher degree of tension, rising pressure in our region under any guise," Erdogan said.

Erdogan also stressed Turkey's cooperation with Ukraine in the defense industry, which was the main item on the meeting's agenda, was not a move against any third countries, Al Jazeera wrote.

An Al Jazeera reporter recalled Ukraine was purchasing Turkey's military drones and that "new generation drones will be equipped with the Ukrainian engines."

"Separately, I'd like to thank President Erdogan for his willingness to join the format of the Crimean Platform and take part in its inaugural summit in Kyiv on August 23," Zelensky said.

"If this happens, we will be very grateful to you. It seems to me that this will be a powerful signal that Ukraine and its partners are determined to ensure that the Ukrainian peninsula is deoccupied and to protect the rights of the Ukrainian and Crimean Tatar peoples," Zelensky said.

Read alsoZelensky to visit Paris next week, ambassador saysErdogan testified to support for the Ukrainian initiative, which he says is designed to unite Ukrainian lands.

"We wish the Crimean Platform to become an excellent pretext for all the best for the Crimean Tatars, and for Ukraine in general," the Turkish president said.

"Once again we have reaffirmed our basic principle of non-recognition of the illegal annexation of Crimea," Erdogan stressed.

On April 10, Zelensky arrived in Turkey on a working visit.

The agenda includes issues of defense, tourism, and trade.