Police later explained to RFE/RL's Ukrainian Service that they were looking for members of the Ukrainian protest group Femen. 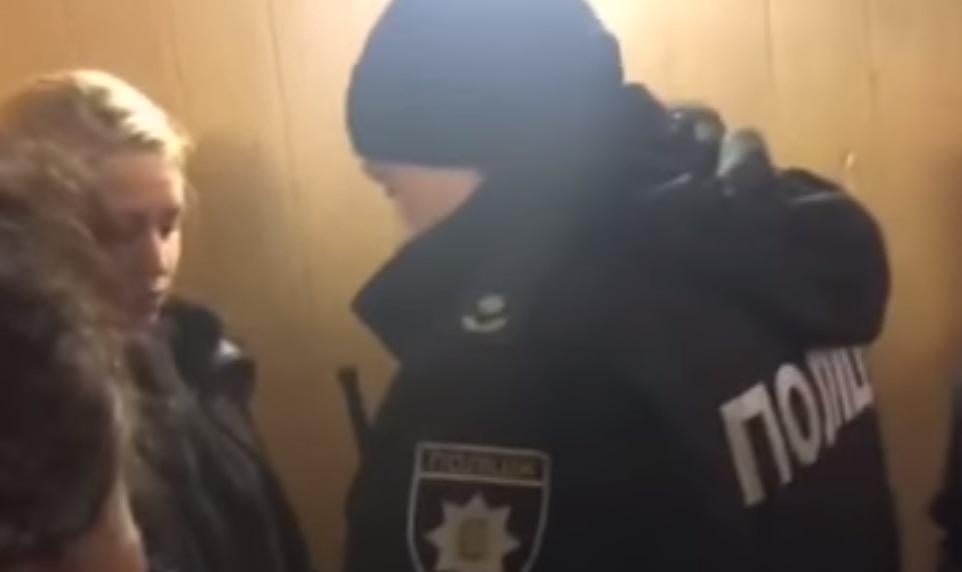 Security checks and searches by Ukraine's police on February 21 during the treason trial for ousted president Viktor Yanukovych caused an uproar on social media after some female journalists had posted about their experience.

Valeriya Egoshyna, an investigative journalist for RFE/RL's Ukrainian Service, said she was through a security check at Kyiv's Obolon District Court when a female officer demanded she remove her jacket and show that she was fully clothed as male officers stood by.

Egoshyna asked why only women were being examined and men were allowed to walk through unchecked. The female officer replied, "women have such things as two [breasts]."

Egoshyna left the courthouse when she found out Poroshenko would not be testifying in person and would appear only via video link.

Told To Strip To The Waist

Other female journalists opted to enter the courtroom to watch his testimony and were reportedly subjected to more invasive checks.

Another RFE/RL Ukrainian Service journalist said police officers ordered women into a bathroom or another empty room. There, female officers demanded they remove clothing above their waists to show they did not have political inscriptions drawn onto their bodies, reporter Olya Komarova wrote in a post to her Facebook page.

Police later explained to RFE/RL's Ukrainian Service that they were looking for members of the Ukrainian protest group Femen, who often demonstrate topless and with political statements scrawled across their bodies.

Read alsoReuters: Topless woman shouts 'Zeman – Putin's slut' at Czech president during vote (Photos, video)Members of the group have focused their attention on Poroshenko in recent weeks; in one incident a topless member set fire to large stuffed bears outside a candy shop owned by the president.

Poroshenko ultimately gave testimony via video-link, rather than in person.

Lischuk said police removed one Femen activist, who was filmed by the Strana news site being led away.

The Institute of Mass Information, a Kyiv journalism watchdog, condemned the measures that singled out women journalists, calling them "humiliating" and "excessive," and demanding apologies from the officers involved.

On February 22, presidential press secretary Svyatoslav Tseholko issued an apology in a post to his personal Facebook page, saying Poroshenko considers the officers' actions "unacceptable" and promising an investigation.

The National Police, however, defended the actions. Spokesman Yaroslav Trakalo said the measures were necessary due to the president's possible attendance. He did not explain why women were singled out.

The incident drew criticism from lawmakers, as well.

"I completely share your indignation with the actions of those representatives of the security forces who yesterday resorted to a humiliating inspection of women media representatives," Iryna Gerashchenko, the deputy chairperson of Ukraine's parliament and a former journalist, wrote on her Facebook page.

"As a representative of the authorities, I apologize to you, dear colleagues, for these strange actions," she added. "Sorry."

Yanukovych, who fled to Russia in February 2014, is being tried for treason for, among other things, allegedly ordering riot police to open fire on protesters in Kyiv's central square amid violent clashes that ultimately led to his ouster.

If you see a spelling error on our site, select it and press Ctrl+Enter
Tags:News of UkrainePoroshenkoYanukovychFementreasoncase