Ukraine has placed the 63rd in the Prosperity Index published by the British Legatum Institute - five places ahead of neighbor Russia. 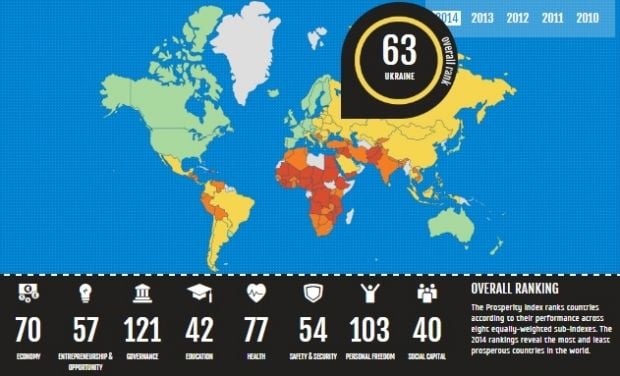 Ukraine ranks 63rd in the Prosperity Index of world countries / Photo from prosperity.com

Norway tops the index this year, with Switzerland, New Zealand, Denmark and Canada rounding off the top five of the rating.

According to the executive director of the Legatum Institute Sian Hansen, the index reflects the level of a "national success." The authors of the Prosperity Index analysed achievements in the surveyed countries’ economies, business sphere, governance, education, health care system, defence sector, protection of rights and freedoms, and income of the population, reports Radio Liberty.

According to the report, this year Russia saw the biggest fall in its ranking compared to other European countries, dropping to 68th against 61st place last year. Legatum Institute analysts said Russia's actions in the international arena were to blame for the fall, namely - the annexation of Crimea, support for the insurgency in eastern Ukraine, as well as its vetos of UN Security Council resolutions on Syria.

As for Ukraine’s other neighbors; Poland ranked the 31st, Belarus 53rd, and Moldova 89th. The Prosperity Index covers 142 countries.