Many Ukrainians feel they have a special relationship with these birds. 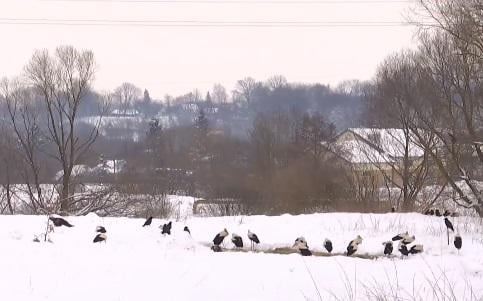 Some 15,000 white storks chose Ukraine as their final destination after wintering in Africa to begin preparations for breeding.

Arriving in Ukraine and other eastern parts of Europe to seek out food which will give them the energy required to produce and rear their young means there is always the chance of snow on the ground, Al Jazeera reports.

That has certainly been the case this year, with heavy snowfall over the last few days, and the prospect of more cold, snowy weather in the next few days.

Read alsoSnowstorms leave almost 130 Ukrainian settlements de-energizedThis has prompted those in the western regions of Chernivtsi and Ivano-Frankivsk to come to the storks' aid. They have been placing layers of hay on top of the snow to help insulate the birds from the worst of the cold. Scraps of fish and meat, which the storks seem to readily accept as a replacement for their regular diet, have been distributed across the feeding grounds.

Many Ukrainians feel they have a special relationship with the white stork.

It is considered the national bird of Ukraine, and it is seen as a symbol of family, loyalty and patriotism. If a stork nests on the roof of your house it is said to bring good luck.

Although the worst of the snow is probably over, cold weather is expected to persist in Ukraine in the coming days. Hopefully, the storks will breed successfully. If so, their chicks will spend two to three months with their parents before gathering in the wetlands of Ukraine, ahead of their long journey to their winter feeding grounds in South Africa.