With officials in Moscow continuing to deny that Russian military vehicles have entered Ukraine, the British Embassy in Kyiv on Wednesday issued a handy guide to spotting Russian tanks, in an apparent bid to help clear up confusion in the Kremlin. 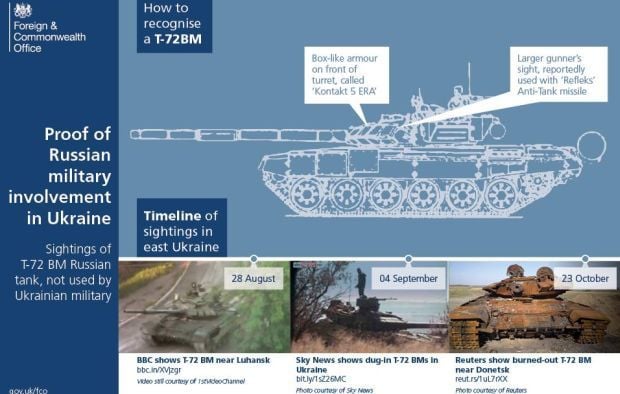 The embassy posted an infographic to its Twitter page on how to recognize T-72BM tanks, which are not in service in Ukraine, but which are widely used by Russian forces.

Disappointingly, the infographic does not also note the distinctive engine radiator grilles at the rear of the T-72, which allow it to be easily distinguished from the T-64 tanks used by Ukrainian forces.

The infographic does, however, include pictures of sightings of Russian T-72BM tanks in Ukraine, with dates and locations provided - quite a boon for budding Russian tank spotters.

Ukraine has long claimed that Russian military equipment has been supplied to the militants in the east of the country, but only last week did NATO confirm that it had indeed spotted several large columns of Russian military hardware entering eastern Ukraine from Russia.

Russia denies sending weapons and troops to support the insurgents, though it has said some of its “retired” soldiers have gone to fight on the side of the militants “on their holidays.”