Some of the injured children will be transferred to the Brest regional hospital. 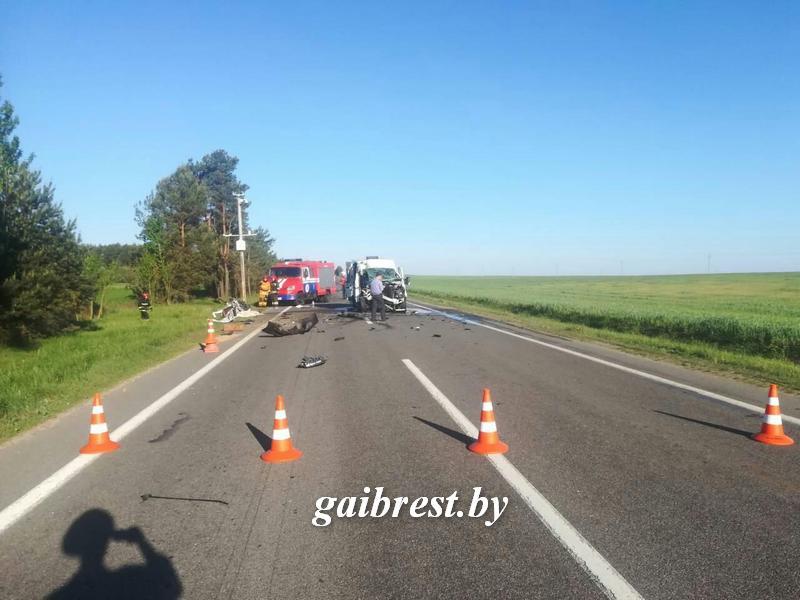 The venue of the accident / Photo from Brest region's traffic police

A Ukrainian teenager has been killed and another six have been badly injured when a van reportedly carrying a children football team from Ukraine collided with an Amkodor loader in Belarus on May 13.

The incident occurred at the 54th kilometer of the P-98 Kamyanyets-Shereshevo-Svisloch highway at about 07:00 local time on May 13, the Belarusian Healthcare Ministry's press service has said.

"According to preliminary reports, the driver of the Renault Master vehicle collided with an Amkodor loader driven by a local resident. A passenger (born in 2005, a citizen of Ukraine) who was at a front passenger seat at that moment was killed in the collision. The State Automobile Inspectorate and investigators are working on the scene," the BelTA Telegraph Agency reported with reference to local traffic police.

The driver of the Renault Master is a Ukrainian, born in 1976.

The teenager was from the Ukrainian city of Sumy, Sumy Regional Administration's youth and sports department told UNIAN.

"A boy from Sumy died in that road accident. The mother has been informed. She is about to leave for Belarus," Head of the department Dmytro Lantushenko said.

All victims were diagnosed with craniocerebral injuries of varying severity, as well as fractures and dislocations. One of the injured is in a critical condition and was put on a ventilator.

They are now in Belarus' Kamyanyets district hospital, Brest region.

Head of the Department of the Consular Service of the Ministry of Foreign Affairs of Ukraine Vasyl Kyrylych in turn said that two pf the injured children in the accident were in a critical condition.

According to Lantushenko, the local authorities in Ukraine are now trying to find out details about the trip as no team of young football players had officially been sent to a competition outside Sumy region.

"Reportedly, these were children from Sumy region who were on an unofficial trip allegedly for the exchange of experience. Nobody from the Sumy team was officially sent to competitions abroad. There were two or three buses with children. President of the Ukrainian Football Federation Andriy Pavelko has instructed Chairman of Sumy region's Football Federation Andriy Prokhorovych to go to Belarus to examine the situation and provide necessary assistance on the spot," Lantushenko said.

In turn, Director of the Department of Education and Science of Sumy Regional State Administration Viktoria Hrobova told a UNIAN correspondent that it was a public organization that arranged the children's trip outside Ukraine. "There is a certain Ukrainian-Polish-Belarusian council. A public organization sent our children abroad under its program. It has turned out that they have travelled this way for five years. Now we are sorting out, because no one officially gave permission for such a trip," Hrobova said.

"The best doctors of Belarus and all necessary equipment have been engaged in assistance to the injured children," Belarusian Healthcare Minister Valery Malashko said in turn.

Brigades of doctors from the Belarusian cities of Brest and Minsk arrived in Kamyanyets.

"Some of the injured children will be transferred to the Brest regional hospital today," the Belarusian Healthcare Ministry said.

Ukrainian President Petro Poroshenko in turn wrote on Twitter that he had instructed Ukrainian diplomats and doctors to provide all the necessary assistance to the young Ukrainian football players who were injured in the road accident in Belarus. He also expressed condolences to the victims and their families.

If you see a spelling error on our site, select it and press Ctrl+Enter
Tags:News of UkraineBelarusaccidentchildrenfootballtraffic