Russia has again failed to obtain Kyiv’s permission to send another "humanitarian convoy," into Ukraine, spokesman for the Information and Analytical Center of the National Security and Defense Council Andiy Lysenko said at a briefing in Kyiv on Thursday. 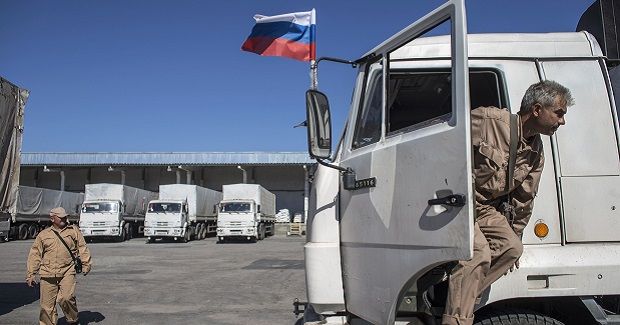 Asked whether the Russians had agreed with Ukraine on the content and route of the eighth such convoy, which is being organized by the Russian Emergencies Ministry and which is expected to travel to Ukraine in late November, Lysenko said that it had not.

"Russia no longer coordinates this issue with the Ukrainian border guard and customs services, arranging such convoys unilaterally, and unfortunately this practice continues, and our Ministry of Foreign Affairs will react appropriately in this regard," Lysenko said.

Fuel, mainly gasoline and diesel fuel, will account for about 40% of the cargo, he said.

As UNIAN reported earlier, starting from August 23, seven convoys that Russia claims carried humanitarian aid for residents of eastern Ukraine have crossed the Ukrainian border. The Ukrainian Foreign Ministry has said that the convoys are just one of the methods Russia is using to provide support to militants waging an insurgency in the east of Ukraine.

On November 18, the head of Security Service of Ukraine Valentyn Nalyvaichenko said that Russian convoys are delivering to the Donbas fuel for armored vehicles, as well as weapons and equipment for training insurgents.

Ukraine has been unable to fully inspect any of the convoys. When the first convoy was sent in late August, Western journalists who were allowed to inspect some of the trucks of the convoy found some of them to be half empty.

The convoys have so far only travelled to areas of Ukraine where Russian-backed militants have seized control.