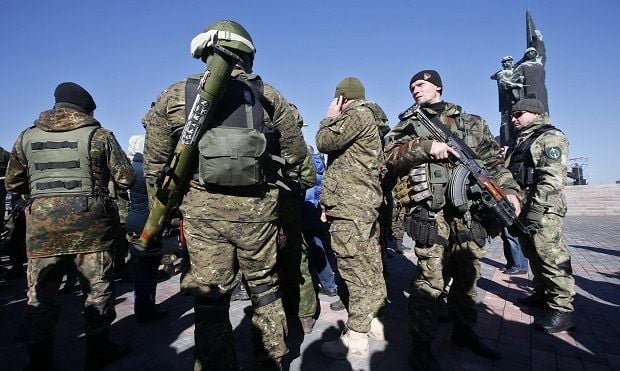 "Over the last few days the enemy has carried out massive strikes on the positions of Ukrainian troops near Debaltseve, causing casualties among local residents," Tymchuk wrote.

There was an increase in the intensity of the attacks on the positions of Ukrainian troops to the north and north-west of Luhansk, he said. During yesterday's battle near the village of Stanitsa-Luhanska the enemy used a large force of eight tanks. However, one tank of the militants was destroyed and the attack was thwarted by return fire from Ukrainian troops.

In the area of the Bakhmutskaya highway a militant roving artillery group was spotted. Six 122-mm self-propelled 2S1 howitzers were spotted while changing their firing positions.

A convoy with militants wounded during clashes in the area of Shastya (up to 80 people) also arrived in Luhansk, Tymchuk said. Most of the wounded will be evacuated to Rostov-on-Don.  A convoy with the bodies of insurgents and Russian troops (three Ural trucks) was seen heading from Horlivka to Yenakievo. One convoy also went from Donetsk to Makiyivka carrying bodies (at least two Ural trucks, accompanied by Russian soldiers disguised as local fighters, with DPR shoulder patches).