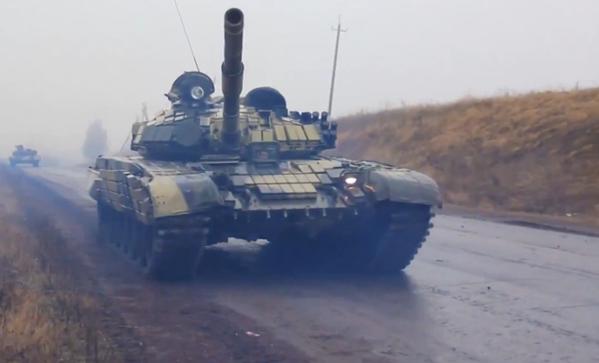 The video, posted on the YouTube account Слава Украине (Slava Ukrainye) and tweeted on Friday by @djp3tros of the Ukraine@war blog, shows a large column of tanks, APCs and army trucks, some towing artillery pieces, moving along a highway.

Some of the tanks have flags of the self-proclaimed Donetsk People’s Republic, while other vehicles have military unit markings. Several of the vehicles have “To Mariupol” daubed on their sides in Russian.

Mariupol, a major port city in southeastern Ukraine, has been named several times by militant leaders as a top target as they aim to consolidate and widen their control over the southeastern portion of Ukraine.

Other vehicles have “Oplot” written on them – the name of one of the militant groups that have seized control in parts of Ukraine’s Donetsk and Luhansk regions.

The T-72 tanks seen in the video are of a type that is not used by the Ukrainian military. Russia denies sending tanks and troops to help the militants in the east of Ukraine wage their insurgency in Ukraine, but mounting video and photographic evidence indicates that Moscow has indeed been sending military hardware to the insurgents.

Both NATO and the Ukrainian authorities have claimed Russia is continuing to send tanks, troops and military equipment into Ukraine, in violation of the Minsk peace agreements Russia signed on September 5.