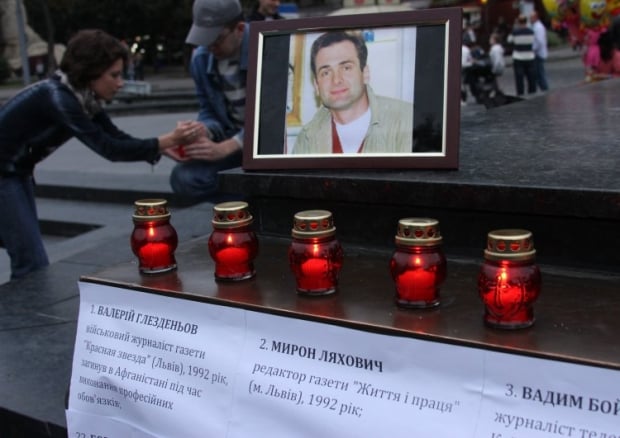 Ukraine on September 16 is commemorating journalist Georgiy Gongadze, who was kidnapped and killed in 2000.

In November the same year, a decapitated body was found in the forest near the village of Tarashcha, Kyiv region, which, according to experts, could belong to the journalist.

Ukrainian journalists and human rights activists have appealed to the authorities to investigate into the murder of Georgiy Gongadze. This is stated in a joint statement by several journalists' organizations and NGOs, the media outlet Radio Liberty said.

"On September 16 every year for all 18 years, we, journalists and human rights activists call on Ukrainian officials with the same request – investigate the murder of journalist Georgiy Gongadze. All presidents and all chiefs of the Ministry of Internal Affairs and the Prosecutor General's Office pledged to find and prosecute those who ordered the assassination. But the same thing happens from year to year. We, members of Ukrainian media organizations, human rights organizations and journalists' community are outraged by continuous empty promises, and we demand from the President of Ukraine, the Prime Minister, the Minister of Internal Affairs and the Prosecutor General that the investigation be completed and the names of those who ordered the murder of our colleague be disclosed," the statement says. The journalists and the public also demand an immediate investigation into the murder of Belarussian-born journalist Pavel Sheremet, who was killed in a blast in the center of Kyiv on July 20, 2016.

"We want to hear a public report by the authorities on the progress of these investigations, and we are waiting for their speedy completion and punishment of those guilty," reads the statement signed by the Institute of Mass Information (IMI), the Media Detector media watchdog organization, the Center for Civil Liberties, the Human Rights Information Center, Pylyp Orlyk Institute for Democracy, the Donetsk Institute of Information (the think tank about Donbas), and NGO Digital Security Lab Ukraine.

"Today, on the 18th anniversary of the disappearance and subsequent murder of Ukrainian journalist Heorhiy Gongadze, we pause to remember and honor Gongadze and other journalists who have died or suffered intimidation and attacks because of their work," the Embassy tweeted on September 16.

UNIAN memo. Georgian-born Georgiy Gongadze, 31, a co-founding editor of the online newspaper Ukrayinska Pravda, was kidnapped in Kyiv in autumn 2000 during Leonid Kuchma's presidency. Later, his decapitated body was found outside Kyiv. Three former officials of the Ukrainian Interior Ministry's foreign surveillance department and criminal intelligence unit (Valeriy Kostenko, Mykola Protasov and Oleksandr Popovych) accused of his murder were arrested in March 2005 and a fourth one (Oleksiy Pukach, the former chief of the unit) in July 2009. A court in Ukraine sentenced Protasov to a sentence of 13 years and Kostenko and Popovych to 12-year terms in March 2008 for the murder. On January 29, 2013, Pukach was sentenced by Kyiv's Pechersk District Court to life imprisonment. Gongadze's widow Myroslava Gongadze and their two daughters received political asylum in the United States and have lived there since 2001. His mother, Lesya Gongadze, a native of Lviv, died on November 30, 2013. Gongadze's body was buried in Kyiv on March 22, 2016.

If you see a spelling error on our site, select it and press Ctrl+Enter
Tags:News of UkrainejournalistsGongadzejournalistmurder