The police said that teaching a workshop counts as a labor activity, which requires a visa. 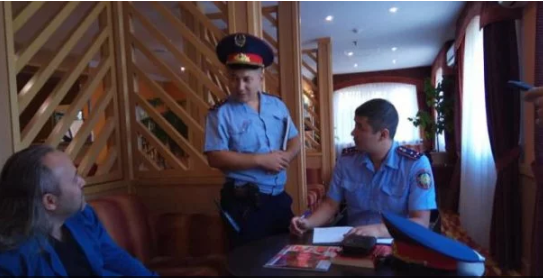 Ukrainian journalist and fact-checker Oleksandr Gorokhovsky faces deportation in Kazakhstan, where he came to teach a journalism workshop.

Kazakhstan authorities say he was supposed to get a visa to lead a workshop, while the journalists' colleagues see it as a part of the authorities' crackdown on the free press, and say Kazakhstan is borrowing a page from Russia's book, the Kyiv Post said.

Gorokhovsky arrived in the city of Uralsk in Kazakhstan on September 14 without a visa, benefitting from the agreement between Ukraine and Kazakhstan which allows a visa-free stay for up to 90 days.

He was supposed to teach a two-day journalism workshop for local journalists on September 14-15 by invitation of the independent newspaper Uralskaya Nedelya (Ural Week). But as he was teaching on September 15, local police interrupted the workshop.

The police said that the Ukrainian was supposed to get a visa to hold training in Kazakhstan. However, they failed to specify what kind of visa was needed. The visa-free agreement between Ukraine and Kazakhstan doesn't limit the visa-free stay to private or tourist visits.

The Ukrainian journalist's trial will take place on September 17. If found guilty of violating visa conditions, he faces a fine of $6, a 10-day administrative arrest or deportation.

Lukpan Akhmedyarov, the chief editor of the Uralskaya Nedelya and the organizer of the journalism school that brought Gorokhovsky to Kazakhstan, believes that Gorokhovsky's case is linked to his newspaper's criticism of the authorities.

Gorokhovsky is the chief editor of the Ukrainian website Bez Brehni (Without Lies) that focuses on fact-checking politicians' statements and claims.

Akhmedyarov invited Gorokhovsky to visit Uralsk and share his experience with the attendees of the journalism school that is held for the second time in the city.

Financed by grants, the school offers free journalism lessons to anyone interested, including school and college students, journalists and people of other occupations.

The police officers told Gorokhovsky that they received a phone call about an alleged violation. According to Akhmedyarov, the police said the caller told them "there was a seminar about Ukraine."

The police said that teaching a workshop counts as a labor activity, which requires a visa – but they failed to specify what kind of visa, Gorokhovsky says.

Gorokhovsky says that he didn't apply for a work visa because he didn't come to Kazakhstan to work. The journalism school paid for his travel and accommodation but he didn't receive an honorarium for the training.

"This is a private visit for the exchange of experience. There was no commercial component, we did not sign a work contract, so it wasn't a labor activity," Gorokhovsky told the Kyiv Post.

If you see a spelling error on our site, select it and press Ctrl+Enter
Tags:News of UkrainejournalistKazakhstan