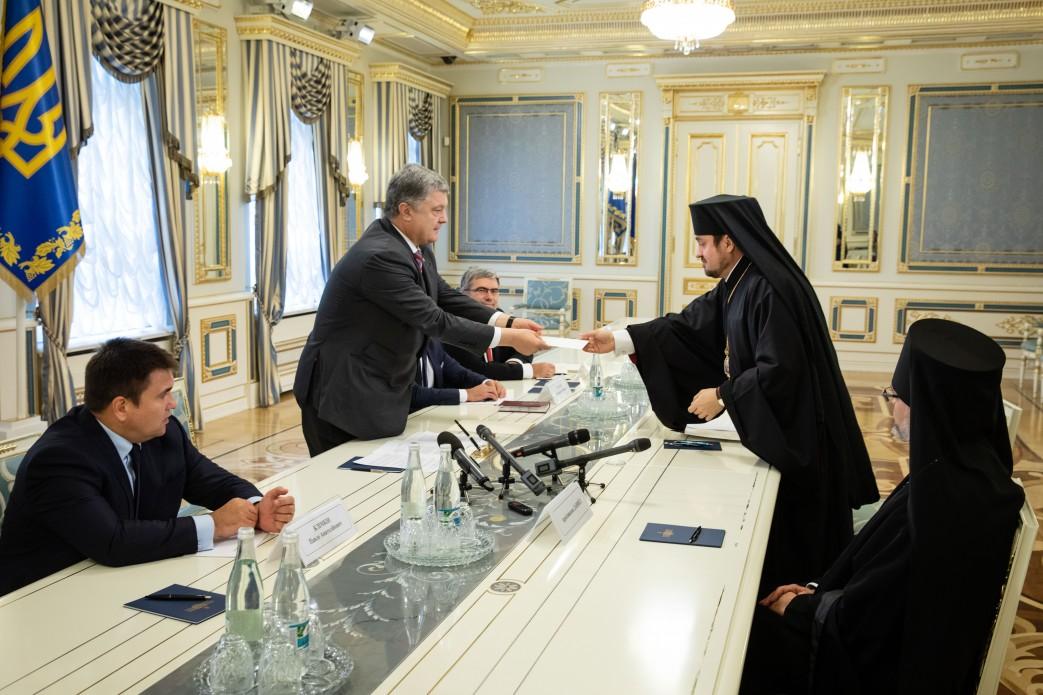 Ukrainian President Petro Poroshenko has met with two envoys, Exarchs of the Ecumenical Patriarchate in Ukraine Bishop Ilarion of Edmonton and the Western Eparchy of the Ukrainian Orthodox Church (UOC) in Canada and Archbishop Daniel of Pamphylia and the Western Eparchy of the UOC in the United States of America dispatched to prepare for establishing a Ukrainian church that is ecclesiastically independent from the Russian Orthodox Church.

"I am very grateful to His All-Holiness, Ecumenical Patriarch Bartholomew for the courage and wisdom shown with your appointment," the presidential press service quoted Poroshenko as saying at a meeting with the envoys in Kyiv on September 17. "We know that Ukrainians have prayed for hundreds of years to have an independent Orthodox Church in Ukraine."

The Ukrainian president emphasized that the beginning of the mission of the Exarchs of the Ecumenical Patriarchate in Ukraine, Archbishop Daniel and Bishop Ilarion, is an extremely important event for all Orthodox people in Ukraine.

Archbishop Daniel in turn noted that almost a month had passed since his last visit to Ukraine.

"This time we arrived in Ukraine with an extraordinary mission, we personally represent Ecumenical Patriarch Bartholomew and at the same time the Holy Synod of the Ecumenical Patriarchate of Constantinople in order to continue working on the fait accompli that the beginning of the process of granting autocephaly to the Orthodox Church in Ukraine has begun. We are on the straight line that goes to the finish line," Archbishop Daniel said.

"We have much work to do," he said, adding that he could not agree with statements by some mass media that the appointment of the Exarchs will divide the Ukrainian Orthodoxy. "On the contrary, [we arrived] to take even more steps to bring unity for the Ukrainian Orthodox Church," Archbishop Daniel said.

"It is with particular joy and spiritual exaltation that we would like to inform you that in the framework of the already initiated process of giving the long-awaited status of autocephaly to the Christ-loving Ukrainian people, the Holy Synod unanimously decided at the last meeting to appoint His Eminence Archbishop Daniel of Pamphylia from the United States and His Eminence Bishop Ilarion of Edmonton from Canada, both serving in the respective countries to the Ukrainian Orthodox believers under the canonical intercession and spiritual care of the Constantinople Mother Church, Exarchs of the Ecumenical Patriarchate in Ukraine," the letter reads.

"This remarkable historic decision of the First Orthodox Church will definitely contribute to the processes of granting autocephaly, which we pray for and work over day and night. With this joyful message from the Constantinople Mother Church, the First Orthodox Church, we warmly congratulate you on faith in the wonderful process that we, together with you, have initiated for the spiritual prosperity and independence of the Christ-loving and long-suffering Ukraine," the letter reads.

Archbishop Daniel also informed that several meetings had already been set up with various representatives of religious organizations.

The Ukrainian president stressed that the church should be separated from the state and especially from a foreign state.

As was reported, the prospect of an autocephalous (independent) church in Ukraine has deeply angered the Russian Orthodox Church, which has given a sharp spiritual rebuff to Ecumenical Patriarch Bartholomew I and questioned his status as "first among equals."

If you see a spelling error on our site, select it and press Ctrl+Enter
Tags:News of UkrainechurchPresident PoroshenkoOrthodox