A fierce battle raged in the ruins of Donetsk airport on Thursday, with reports from a journalist on the scene that two Ukrainian soldiers have been killed while defending the facility from attacks by militants. 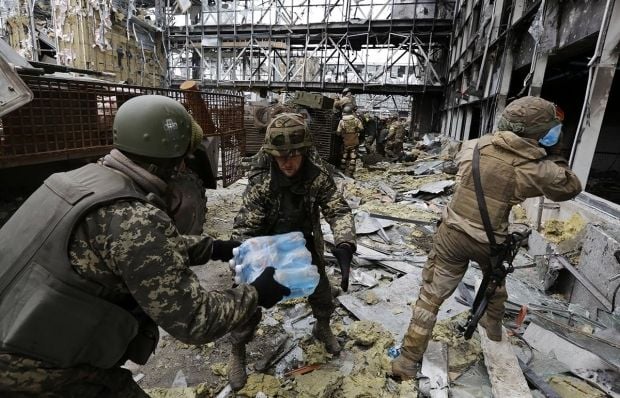 "Today, two Ukrainian heroes died a heroic death in the battle for the airport. Seven soldiers were wounded,” the chief editor of news Web site Tsenzor.Net, Yuriy Butusov, wrote in a post on Facebook.

"[Here is] the operational environment at Donetsk airport on January 15, at 1600: The battle for the airport has reached the same intensity as in late September and early October - at the peak of the fighting.”

According to the journalist, the enemy is directing heavy fire from tanks and artillery on the Ukrainian-held parts of the airport, and is blasting the new terminal with the aim of causing it to collapse.

"This morning, as a result of an enemy artillery barrage ahead of the attack, further damage was done to the [ruined] control tower of Donetsk airport - the remaining second and third floors collapsed. Walls on the second floor in the new terminal also collapsed."

After the artillery barrage, there was an attack by infantry on the terminal building, Butusov reported.

“Taking advantage of the collapse of the walls, the enemy penetrated the second floor of the new terminal,” he wrote.

“Attacks were also carried out on the basement, [and] on the first and third floors. The enemy is using the tactics of assault groups. The enemy assault units are fully manned by Russian citizens. The units of up to platoon [in strength] are extremely well equipped and armed, with flame-throwers and RPGs, [and] close in on our defensive line, producing intense fire at close range, and secure [their positions]. After that, they fire on the identified positions of our soldiers. "

According to Butusov "violent melees at distances of 50-100 meters with a large force of infantry have continued all day, and continue at this moment."

He said that in spite of the intense fire from all types of weapons on the new terminal and the fierce assault by enemy attack units, "[Ukrainian] soldiers are fighting in the terminal with dignity, and are holding their positions. Nobody is going to retreat. The morale of our guys is very high. "