Russian-backed militants launched a fresh assault on Donetsk airport on Friday, with some Ukrainian soldiers reported to have been wounded in the fighting, according to reports from the scene. 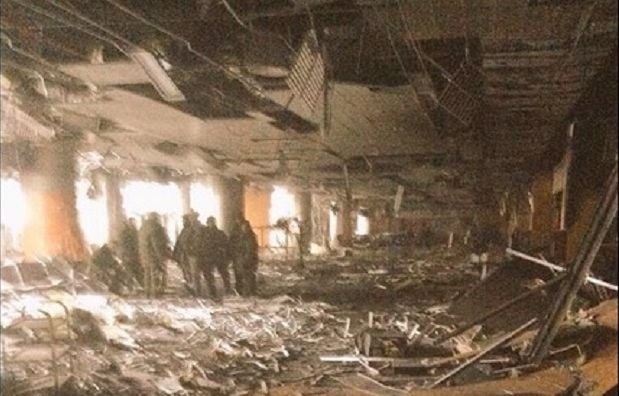 "Yesterday by midnight the situation had stabilized, and the reinforcements that came in the evening helped restore the status quo," Ukrainian Presidential Advisor Yuriy Biryukov wrote on his page on Facebook at 1130 on Friday.

"But in the morning an intense assault began, and there are wounded on our side (no information about dead yet). The storming is VERY intense - again (going by some signs) they’re sending ‘orcs’ on methadone,” Biryukov said.

Earlier, the acting press secretary of the General Staff of Armed Forces of Ukraine, Vladislav Seleznev, said at a briefing in Kyiv that Ukrainian troops were still in control of the new terminal building at the ruined facility, an UNIAN correspondent reported.

"I have verified information on the situation in Donetsk airport half an hour ago - the situation has not changed, it was calm," Seleznev said, speaking early on Friday morning.

ATO press officer Leonid Matiukhin also said ealier that "the new airport terminal in Donetsk is under the control of the ATO forces."

As reported by UNIAN, on Thursday fighting between the Russian-backed militants and Ukrainian forces for the Donetsk airport lasted all day. Two Ukrainian soldiers were reported to have been killed and seven wounded in the battle.

The Russian-backed militants and the Russian media reported several times that the terminal had been taken by anti-government forces.

Below is a recent Facebook status update by Yuriy Biryukov

Recent data about the Donetsk airport, as of 1100.

Yesterday, by midnight the situation had stabilized, and the reinforcements that came in the evening helped restore the status quo. But in the morning an intense assault began, and there are wounded on our side (no information about dead yet). The storming is VERY intense - again (going by some signs) they’re sending "orcs" on methadone.

Now the [fight back] has started, the firing up of the [information battle] on Facebook, and a lot of things. And yes, this is now necessary. And yes, I am also, in part, taking part.

1) I’m not going write that everything is ok. There's a fierce fight, and the stress of the fight and the situation there is the worst it’s ever been, which in my case is since the end of September.

2) At the headquarters of the General Staff and the ATO last night and now, right now, there are meetings after meetings. On the one hand - there is a clear decision to hold onto the airport. On the other – they have to decide about the things they were discussing two (TWO) months ago. But the leader … at the headquarters of ATO did not do anything, he just went on nice inspections of the front to check if there was a sufficient number of stools. Now he's going back to Kyiv and pretending not he’s got nothing to do with it. General Pushnyakov - you will have to sooner or later have to answer for very many of your actions, and most importantly - for your inaction.

3) I did everything I could – I reported to the minister and the president. They confirmed that the General Staff are given strict instructions. Now something must be resolved by headquarters. We’ll have to [mild expletive] wait.

4) There’s no point getting dramatic on Facebook now, things are already anxious enough as it is.