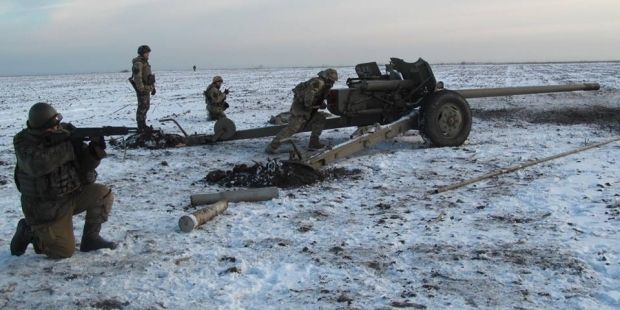 According to initial reports by soldiers on social networks, the tanks broke through Ukrainian lines on the Bakhmutka highway and the Russian military advanced into the village of Zholobok.

"Checkpoint No. 31 on the Bakhmutka highway was destroyed by the Russians,” wrote blogger Sergiy Ivanov on his page on Facebook.

“After six hours of shelling, launched from all possible weapons, tanks were deployed. Ukrainian soldiers burnt out one of them, but it is still not clear how many forces and equipment are involved in the operation, which aims to surround the village of Krymske, encircling the 24th brigade of Armed Forces of Ukraine stationed there. The Russian military have entered the settlement of Zholobok – not the separatists, not Cossacks, but the Russians themselves."

The report was then apparently confirmed by a soldier of the Donbass Battalion, Yevhen Shevchenko.

"The tanks broke through on Bakhmutka and the Russians have already entered Zholobok,” he said.

“The 24th brigade, our neighbors, are suffering losses under heavy fire from all kinds of artillery weapons, and have left checkpoint No. 31. Fighting is going on for checkpoint No. 29!"

Not so, according to Inter TV channel journalist Roman Bochkala, writing about an hour after the story initially broke.

“Stop panicking! The [31st] checkpoint hasn’t been abandoned. Our guys just regrouped – do you see the difference? They did the right thing, as enemy tanks did approach in force.”

As of the time of writing UNIAN has been unable to confirm the reports of the tank attack.

The reports reflect the general lack of information about the increase in fighting in the east of Ukraine, and the amplifying effect of the social media on unconfirmed reports. Earlier, Ukraine’s Defense Ministry said it would no longer give detailed information about military activities in the Donetsk area.

But it is known that Ukraine has been engaged in a bitter battle for control of Donetsk airport for nearly a week. Russian-backed militants began a determined attempt to seize control of the wrecked airport on January 13. Then on the evening of Saturday, January 17, Ukrainian forces were reported to be carrying out a counter offensive to relieve troops besieged by the militants in the ruins of the airport’s new terminal.

The next day, Ukrainian military officials said they had managed to regain control of the airport, but offered no evidence to back their claim.

Meanwhile, Russian TV was showing what appeared to be footage of militants inside the new terminal, indicating they controlled large parts of the facility, contrary to the claims of officials in Kyiv.

Fighting was then reported at the village of Pisky, a key link in the Ukrainian supply chain, nicknamed the “Road of Life,” supporting the Ukrainian troops thought to be grimly holding on to part of the airport complex.

But as of Tuesday, Ukrainian troops were reported to have fought off a militant attack on Pisky, and were said to be in control of the village, which has mostly been abandoned by its residents due to the fighting.