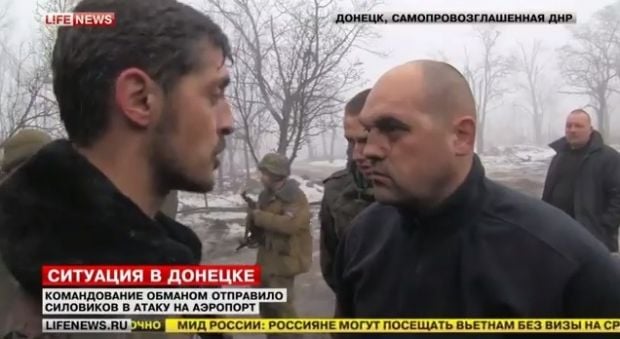 Eight Ukrainian soldiers have been captured by militants at Donetsk airport. Screenshot from Lifenews.ru

"This morning, several dozen fighters of the Airborne Forces went to help their comrades-in-arms at Donetsk airport. There was a thick fog, and the visibility was about 20-30 meters. It is difficult to explain to civilians, who have never been on the front line - this fog is fatal for the mind and for people," he said.

According to Biriukov, the Ukrainian soldiers had to move on a flat expanse of concrete, without any points of reference.

"And they missed [the terminal]. They missed it by some 800 meters, and went a little to the left. And they found themselves directly in a place of concentration of the militants," he said.

"There was a fight. There were casualties, and eight soldiers were taken prisoner. I think, it hasn’t been officially announced, but no one will deny it, as we have [their] names and documents," Biriukov said.