The protesters are continuously walking along a pedestrian crossing and are thus blocking traffic. 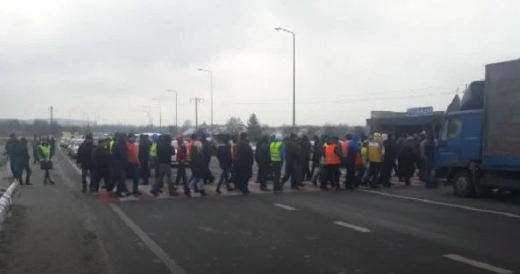 The protesters are continuously walking along a pedestrian crossing and are thus blocking traffic, the news portal Zaxid.net reported with reference to Lviv patrol police's press service.

At about 10:10 Kyiv time, people blocked the road near the village of Rozvadiv. Activists also announced the blocking of the Kyiv-Chop highway near the villages of Kizliv, Hai-Smolenski and Solonka in Lviv region.

As UNIAN reported earlier, Ukrainian owners of imported cars with foreign registration plates blocked traffic in the center of Kyiv on November 20 as part of a new large-scale protest campaign. They demand that recently passed bills on excise tax on passenger cars be amended along with a reduction in customs clearance costs for Ukrainians who have bought their cars abroad, in particular, in the European Union.

The public movement behind the protest campaign, NGO Auto Euro Sila, announced its indefinite "act of civil disobedience" in 46 cities and towns of Ukraine.