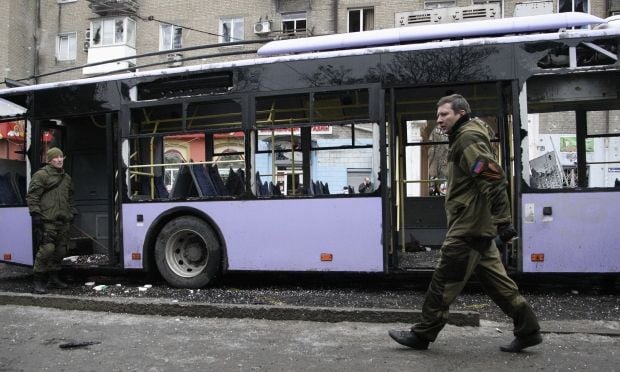 According to initial reports, the incident occurred at 0900 in the city’s Leninsky district, at Bosse bus stop.

Eyewitnesses say windows on some neighboring homes were blown out by the shelling. This southern area of the city had previously been considered safe from shelling.

Based on the photos from the scene, the shelling killed not only people at the bus stop and on transport beside it, but also people on the opposite side of the road.

Donetsk city administration has reported that the shelling "in the area of Bosse bus stop damaged a No. 3 tram, injuring a woman driver", and "seven people were killed" as the result of "a direct hit" on a No.17 trolleybus, as well as hits on a No. 37 bus, causing death and injuries to people.

Ukrainian defense officials have denied being responsible for the attack, saying their nearest artillery position is 15 kilometers away.

There have been reports in social media that the mortars were fired from a van seen in an area controlled by the insurgents, but there is no official confirmation as to who was responsible for the atrocity as of yet.