The vessels have been captured by Russia's special forces. 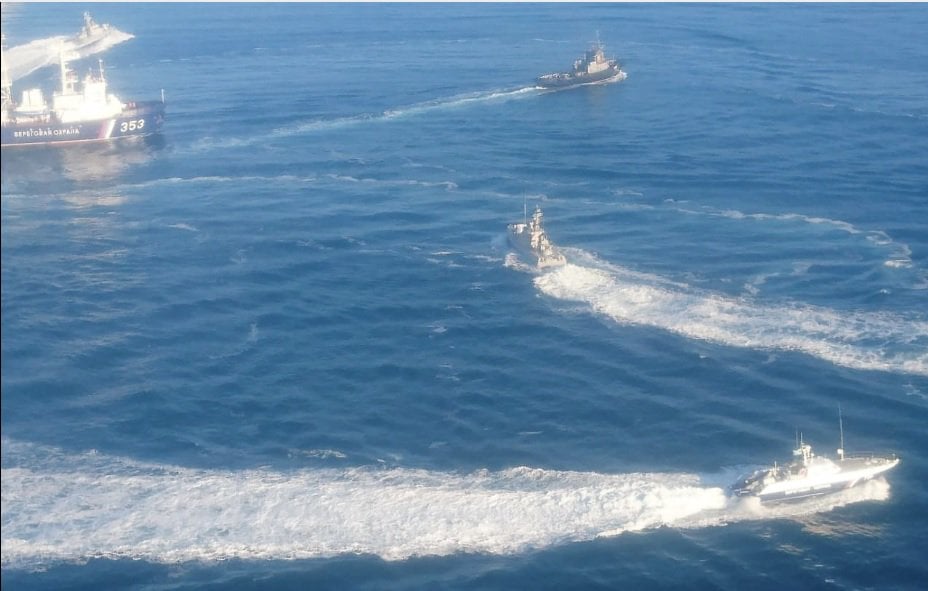 Russia has seized three Ukrainian vessels amid their leaving the Kerch Strait; Ukrainian President Petro Poroshenko is gathering the Military Cabinet over the incident.

"According to updates, two small-sized 'Berdiansk' and 'Nikopol' armored artillery boats have come under enemy fire and are now dead in the water. The 'Yany Kapu' tugboat has forcibly been stopped. The vessels have been captured by special forces of the Russian Federation," the press service of Ukraine's Navy said on Facebook on Sunday evening.

The Ukrainian Navy also reported the number of the Ukrainian sailors wounded in the incident grew to two persons.

There have been no reports whether the Ukrainian servicemen fired back.

Ukrainian President Petro Poroshenko is gathering the Military Cabinet for a meeting over the Russian attack on the Ukrainian boats in the Kerch Strait.

"At 22:00, President of Ukraine Petro Poroshenko is gathering a meeting of the Military Cabinet over the situation in the Kerch Strait and the attack on the Ukrainian military boats," Secretary of the National Security and Defense Council Oleksandr Turchynov's press service told UNIAN.

As UNIAN reported earlier, Russian coast guard ships opened fire on a group of vessels of the Ukrainian Navy as they were leaving the Kerch Strait on Sunday evening. Originally, one Ukrainian sailor was reportedly wounded.

The 'Yany Kapu' (Yani Qapi) tugboat of Ukraine's Navy was rammed by a Russian coast guard ship on November 25 when a group of Ukrainian vessels, namely two small-sized 'Berdiansk' and 'Nikopol' armored artillery boats and the 'Yany Kapu' tugboat were carrying out a planned transfer from the port of Odesa to the port of Mariupol in the Sea of Azov. The Ukrainian side said notification about the transfer plans had been done in advance in accordance with international rules to ensure safe navigation.

The Ukrainian vessels had to make a U-turn on Sunday evening as Russia blocked entry to the Sea of Azov across the Kerch Strait; Russians demanded they stop and threatened to use weapons. "After the group of the Ukrainian navy's vessels started leaving the Kerch Strait, Russian ships and boats began pursuing, demanding they stop and threatening to use weapons," the press service of the Ukrainian Navy said on Facebook in its previous update as of 19:00 local time on Sunday, November 25. It also said that there was information that Russian special forces had been transferred on board the 'Don' ship of the Border Service of Russia's FSB Federal Security Service in order to make a boarding attempt to seize the Ukrainian vessels.

If you see a spelling error on our site, select it and press Ctrl+Enter
Tags:News of UkrainePoroshenkoRussianAggressionAzov