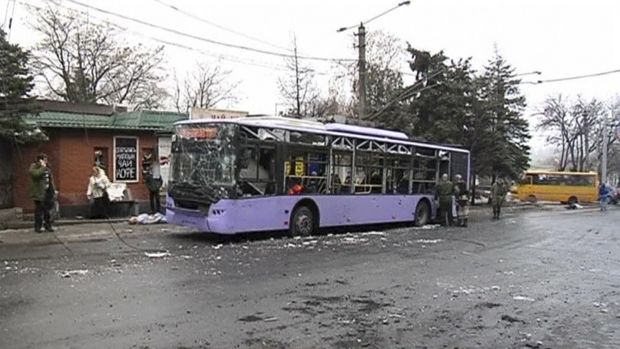 "After analyzing the two craters found on the scene of the incident, the observers came to the conclusion that shells were launched from the north-western direction," the statement reads.

According to the report, the attack was carried out either by mortars or artillery.

The OSCE observers arrived at the scene 20 minutes after the incident occurred. They saw seven victims - three men and three women, while the gender of one victim was unidentified by the observers.

Three bodies were in a bus, another three in close proximity to it and one in a car which was 20 meters away from the trolleybus.

Later, the observers of the Special Monitoring Mission contacted a representative of the Donetsk city morgue, who reported that eight bodies had been delivered to the morgue.

Thirteen people injured in the shelling were hospitalized in the Donetsk regional trauma hospital. According to the head doctor, all of them suffer serious injuries that require surgery.

Western journalists at the scene also confirmed the direction of the shelling. According to a report by Oliver Carroll in the UK newspaper The Independent, a U.S. expert who saw a picture of one of the craters from the shelling confirmed that it had been made by a mortar shell of a type that has a range of less than five kilometers.

The Ukrainian authorities have denied that the Ukrainian military carried out the attack, saying that their nearest artillery position is 15 kilometers away from the site of the attack in the village of Pisky, to the north-west of Donetsk.