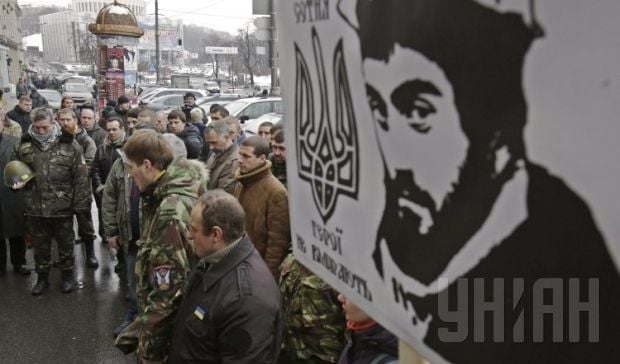 Nihoian was killed with shot from a hunting rifle - two shots in the chest and one in his head - and Zhiznevskiy was killed with a pistol - with a bullet to his heart, the Segodnia newspaper reported on Monday, January 26.

According to Sakal, the police do not have such firearms.

"The investigation is also considering among other versions a killing in order to provoke an escalation of the conflict and justify the use of weapons by protesters. It is confirmed by numerous materials from public sources, where people with firearms were recorded," he said.

"It was also found that the dead bodies were removed, and the witnesses of the murder weren’t found," he said.

The police controlled the area where the activists' bodies were videoed and photographed by many members of the public and the media.

The two activists were killed on January 22 when riot police and Berkut special riot control officers attacked protesters on Hrushevskoho Street in Kyiv, clearing barricades and forcing activists back to Independence Square. Video footage exists of many police and officers using firearms against protesters at the time. Another protester, Roman Senyk, was also shot and killed along with Nihoian and Zhiznevskiy. On January 21, activist Yuriy Verbytskiy was abducted, and his body later found in woods near Kyiv with signs of torture.

As of today, no officials, law enforcement officers, or Berkut officers have been prosecuted for killing, injuring or committing any other acts of violence against the participants in mass protests in the winter of 2013-2014.