Usyk-Takam finalized for May 25 – media

An announcement on the undercard will be made at a later date. 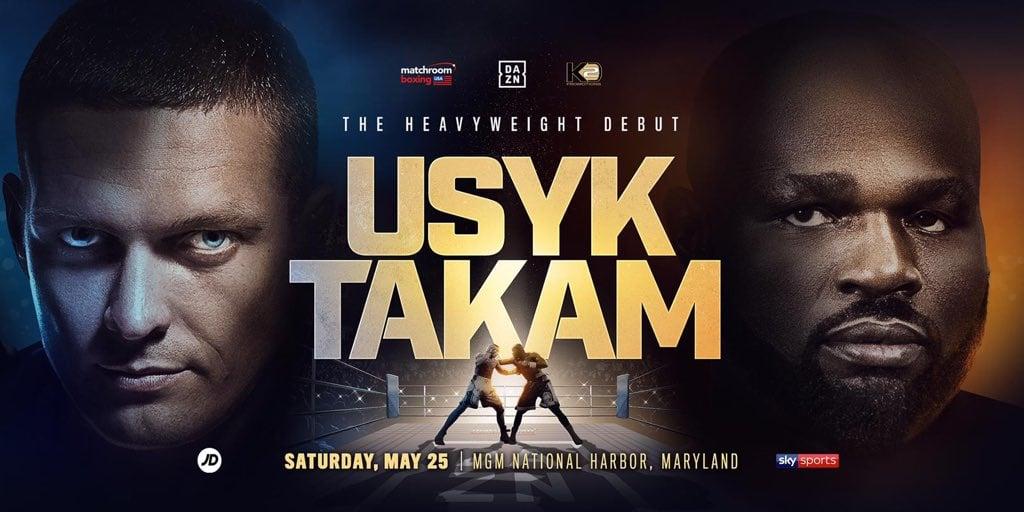 Usyk will take on former world title challenger Carlos Takam on May 25 at the MGM National Harbor in Maryland. The fight will headline a Matchroom Boxing USA card that will be streamed on DAZN, as reported by Fight Sports.

The 32-year-old Usyk won the World Boxing Super Series in 2018 when he defeated Murat Gassiev in the finals to become the undisputed champion. After that fight against Gassiev, Usyk, a former Olympic gold medalist, defended his titles with an eighth-round knockout victory over Tony Bellew. Usyk stated his intent on becoming a champion at the heavyweight division after his win against Bellew.

"May 25 marks a major moment in my career when I move to the Heavyweight division," Usyk said in a press release. "At Cruiserweight I did it all and became the undisputed champion and that is my goal now in the Heavyweights. This is the ultimate challenge and it begins on May 25 against Carlos Takam. It's a tough first fight but I need to test myself against World class opposition on my new road to undisputed."

Takam once came in to replace the injured Kubrat Pulev to challenge for Anthony Joshua's WBA and IBF heavyweight titles in 2017. The two boxers fought in Cardiff, Wales with Joshua retaining his titles with a 10th-round stoppage win. Since that fight, Takam lost a fight to Dereck Chisora and most recently defeated Senad Gashi last December.

An announcement on the undercard will be made at a later date.

If you see a spelling error on our site, select it and press Ctrl+Enter
Tags:News of UkraineUkraineboxingUsyksportsfight