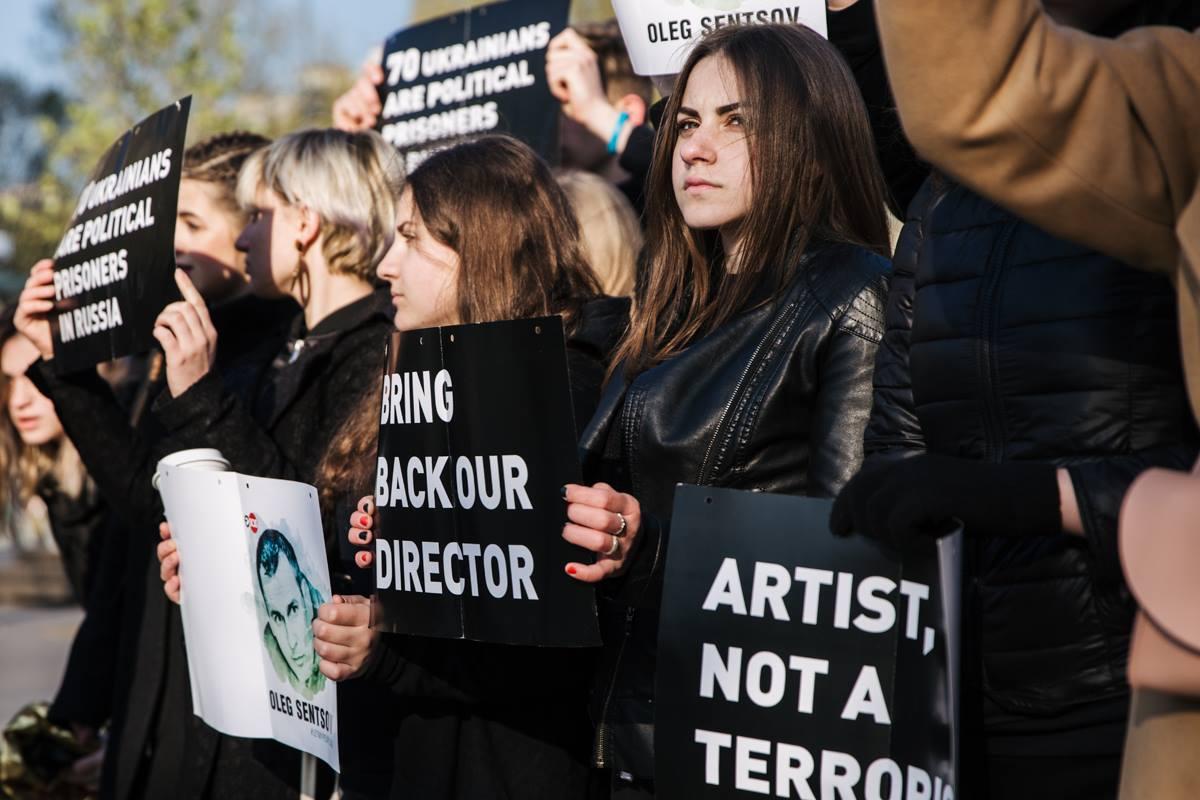 Students of the Ukrainian Leadership Academy staged a street performance in Paris, France, on April 11 in support of Ukrainian film director Oleh Sentsov, who has illegally been convicted and imprisoned in Russia.

"On April 11, students held a 'Missing Director' street event on the Place de la République to support film director Oleh Sentsov and all the Ukrainian political prisoners. On April 11 and April 12, such events are to be held in Berlin, The Hague, Bratislava, Brussels, and Prague. Students reminded the French people that May 10 is the 5th anniversary of Ukrainian director Oleh Sentsov's illegal imprisonment in Russia," the Ukrainian Leadership Academy wrote on Facebook on April 11.

In the center of Paris, students set up a film location – they prepared a camera, sound systems, lighting, the production team and actors to shoot a film. To start filming, the assistant director went up to the camera, opened the clapper board but everybody stopped moving. The filming stopped because the main figure on the site – the director – was absent.

"All the participants in the event were standing still for two minutes to show that the artist cannot be a terrorist. Without the artist the process stops. We thus call on the French authorities to help Oleh Sentsov and other political prisoners return home," said Nikita Mekenzin, the main organizer of the event.

As UNIAN reported earlier, Sentsov was arrested in the Russian-occupied Crimea in spring 2014 together with Oleksandr Kolchenko. In August 2015, the North Caucasus District Military Court in Russia's Rostov-on-Don sentenced Sentsov to 20 years in a high-security penal colony. Kolchenko was sentenced to 10 years in prison. Both men pleaded not guilty.

Sentsov has been serving his term in a penal colony in the town of Labytnangi, Russia's Yamal. He went on hunger strike on May 14, demanding that Russia free all Ukrainian political prisoners. On October 5, the Russian penitentiary agency reported that Sentsov declared an end to the hunger strike starting October 6. Sentsov noted that, had he moved on with the strike, he would have been force-fed due to his critical condition.

If you see a spelling error on our site, select it and press Ctrl+Enter
Tags:News of UkraineUkraineFranceSentsovParissupportFreeSentsovperformancestudent