Office of Right Sector in Odesa blown up 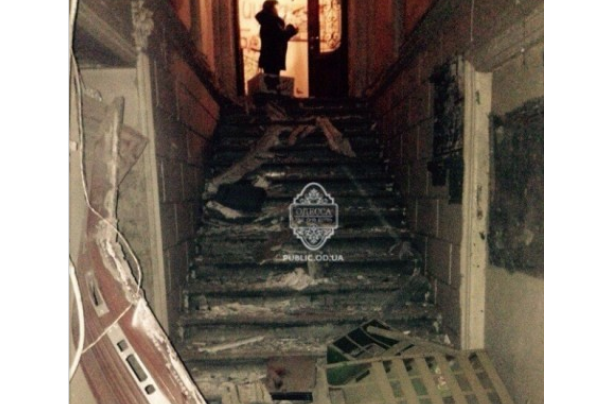 The blast occurred on the city’s Koblevskaya Street, at building No. 40, at about 0030.

No-one was hurt in the explosion. A private apartment located near the office was damaged, as were cars near the building. The blast also shattered windows in neighboring buildings.

The incident reportedly came after Right Sector activists attacked an illegal casino located near the office on the corner of Ekateriniskaya and Deribasovskaya streets. According to media reports, the casino guards began to shoot at them, but the activists were able to disarm the guards.

After the initial shooting, the owner of the casino appeared with unidentified armed men, who started beating the activists, shooting began again, and gas was released into the Right Sector office, shortly after which the explosion occurred.

The activists of the organization barricaded themselves on the second floor of the casino, some seriously injured, and many of them sickened by the gas, according to reports from the activists themselves.

"Our guys are being kept on the second floor. Armed ‘titushki’ (hired thugs) are downstairs. Some of our activists are seriously wounded... And our office has been blown up," the press secretary of the Odesa branch of Right Sector Varvara Chernoivanenko wrote on her Facebook page.

Later, local police and the Samooborona of Odesa (self-defense militia) arrived at the casino. The activists of the Right Sector left, accompanied by members of the Odesa Samooborona, amid protests from the armed "titushki."