At least one person was injured in clashes outside the local Palace of Sports building. 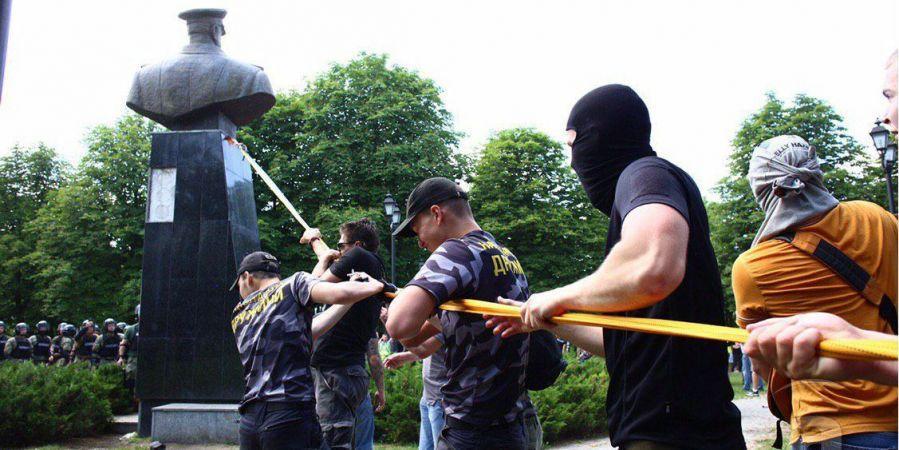 Participants in a protest rally against a recent congress of the Doviriay Spravam ("Trust the Deeds") Party have toppled the statue of Soviet-era General Georgy Zhukov in Kharkiv, Ukraine.

The protesters on June 2 came out to the streets against the congress of the party led by two pro-Russian mayors Hennadiy Kernes of Kharkiv and Hennadiy Trukhanov of Odesa, the local news portal UA:Kharkiv reported.

Among the participants were representatives from NGOs Self-defense, Kharkiv Euromaidan, National Druzhyny (volunteer squads), and the National Corps Party.

At least one person was injured in clashes between protesters and supporters of the Kernes-Trukhanov Party outside the local Palace of Sports building.

After police squads were reinforced at the site of the rally, activists relocated to the area near the Zhukov monument and demolished it.

The protesters put the Ukrainian flag on the pedestal instead of Zhukov's bust.

Then they started breaking the toppled bust with hammers and axes. They also wrote "Killer" on the back side of the bust.

Three police officers were hospitalized with eye burns from tear gas sprayed during the clashes.

Police opened criminal proceedings under Part 2 of Article 296 (hooliganism) and Part 2 of Article 345 (threat or violence against an employee of a law enforcement agency) of the Criminal Code of Ukraine. The maximum punishment is up to five years in prison.

Currently, police officers are investigating all the circumstances and identifying the persons involved in the crimes.

Kernes later said that a new monument to Zhukov would be erected there.